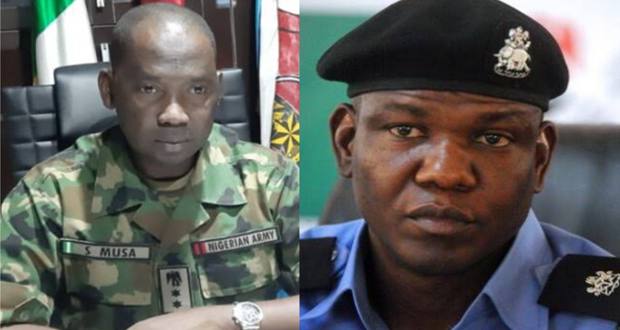 Nigerians are recoiling in shock about the killing of three Nigerian cops last week at the hands of Nigerian army. This week U.S. critics of the Nigerian government and human rights advocates in Nigeria are crying foul.

The tragedy began Wednesday Aug. 7, when a squad of five elite policemen entered the town of Ibi in Western Taraba State to arrest Hamisu Bala, who was believed to be a millionaire kidnapper. They arrested their man quickly and packed him into a Toyota Van and started to drive him back to their headquarters in Jalingo, the capital of Taraba State in Eastern Nigeria.

On the way, the van was riddled with bullets by the Nigerian army, who claimed last Friday that the van refused to stop at checkpoints, according to Nigerian media accounts. The van overturned, spilling out police and the suspect on the turf.

The kidnapping suspect slipped away into the local forest as did two of the surviving policemen. “It was tragic case of mistaken identity,” according to the Army spokesman. Millions of Nigerians think otherwise, based on cell phone videos by witnesses at the scene of the incident. Nigerian Police spokesman Frank Mba refuted the Army’s claim and demanded that the army produce the kidnapper. Some reports say the suspect was “released” by the army.

President Muhammadu Buhari has called for a formal inquiry into what caused the tragic deaths of highly decorated police detectives. An army captain based in Jalingo is the focus of the investigation, according to Vanguard News. The captain, still unidentified, had a cell phone record of 191 calls to Bala in the last month alone, Vanguard has reported. A squad of five soldiers who halted the police van are in custody.

“The Nigerian military has been seriously decimated by its military which has been colluding with terrorists and kidnapping gangs. The fact that it has killed three policemen is a big problem for the bilateral US-Nigeria relationship,” says Stephen Enada, founder of the International Committee on Nigeria, which reports its findings to Amb. Sam Brownback, Ambassador at Large for Religious Freedom at the Department of State.

The U.S. government currently supports Nigeria with $345 billion in humanitarian and development aid, nearly $12 billion in government arms sales to the Nigerian military in 2014, and $7 million for military and police aid, according to the liberal-leaning Security Assistance Monitor.

“The United States has been trying to support the Nigerian military with sophisticated weapons to fight terrorism. But at the end of the day, as in the incident in Taraba, the support to the military is being used to kill Nigerians,” Enada said.

“Americans should be concerned because Nigeria’s crisis is not Nigeria’s alone,” Enada has argued. “A destabilized and crisis-ridden Nigeria has negative impacts for American businesses, international security and the stability of the entire region,” he says.

“The recent murder of three policemen by soldiers in Nigeria remains the latest in impunity on the part of the Nigerian Army,” says broadcaster Samson Akindele, general manager of Fresh 107.9 FM, Abeokuta, Nigeria.

Akindele went on to say, “It also shows a battle for supremacy between the Nigerian military and the Nigerian Police. The killings speak volumes about the level of rivalry and the strained relationship between the two security outfits.” Not only soldiers but some policemen are under questioning, including two local cops who are suspected of serving as gang informants.

“From all circumstantial evidence, the inescapable conclusion is that the killings were deliberate murder,” according to an interview with law instructor Solomon Musa in Zaria. This kind of killing has happened again and again in the past. The military brutalize the police, brutalize the people,” Musa said.

“But the fact is, this type of killing has happened numerous times in the past. There have been several cases in which the military have descended on the police,” he added.

–Douglas Burton and Magnfaith Krimi are co-founders of War Desk News. Burton is a former State Department official who specializes in terrorism in the Middle East and Africa. Krimi is a media entrepreneur from Taraba State raised in Katsina State Nigeria.