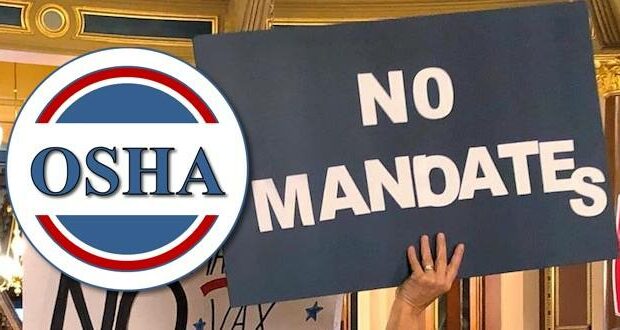 The Labor Department’s Occupational Safety and Health Administration (OSHA) has suspended the enforcement of the Biden administration’s COVID-19 vaccine mandate for private businesses. If it had continued, OSHA would have faced thousands of lawsuits from states, businesses and individuals.

The announcement affects between 80 and 100 million Americans working for private businesses who risked losing their jobs if they declined to get the shot.

The surprise announcement came shortly after a U.S. appeals court rejected a challenge by the Biden administration on Nov. 12 and reaffirmed its decision to put on hold OSHA’s mandate. That controversial mandate requires that businesses with 100 employees or more ti force workers either be vaccinated against COVID-19 by Jan. 4, 2022, or be tested weekly and wear a mask, or lose their jobs.

The Fifth Circuit Court of Appeals in New Orleans stated in an opinion that OSHA’s mandate is “staggeringly overbroad,” and ordered it to “take no steps to implement or enforce the Mandate until further court order.”

The court had previously issued a temporary halt to the mandate on Nov. 6 pending litigation.

“The court ordered that OSHA ‘take no steps to implement or enforce’ the ETS ‘until further court order.’ While OSHA remains confident in its authority to protect workers in emergencies, OSHA has suspended activities related to the implementation and enforcement of the ETS pending future developments in the litigation,” the Labor Department affirmed in a statement in recognition of the court’s ruling.

At least 27 U.S. states, as well as private employers, religious organizations, and other groups, have sued the Biden administration, claiming that it’s exceeding its authority in issuing the mandate.

Meanwhile, White House officials have continued to call on employers to adhere to the vaccine mandate for private businesses after the initial Nov. 6 ruling.  Across the nation, pushback against a forced vaccination is growing as millions consider leaving their jobs and businesses scramble to find workers.

But that has not stymied the White House in pushing perhaps the most unpopular federal policy in history.

“We think people should not wait,” White House principal deputy press secretary Karine Jean-Pierre told reporters on Nov. 8, responding to a question on whether employers should hold off on requiring employees to be vaccinated after the court put the mandate on hold.

“We say: do not wait to take actions that will keep your workplace safe,” Jean-Pierre said. “It is important and critical to do, and waiting to get more people vaccinated will lead to more outbreaks and sickness.”

Employers “should not wait” for legal matters to be resolved before adhering Biden’s vaccine requirement, Jean-Pierre added.

“They should continue to go—move forward and make sure that they’re getting their workplace vaccinated,” she said.