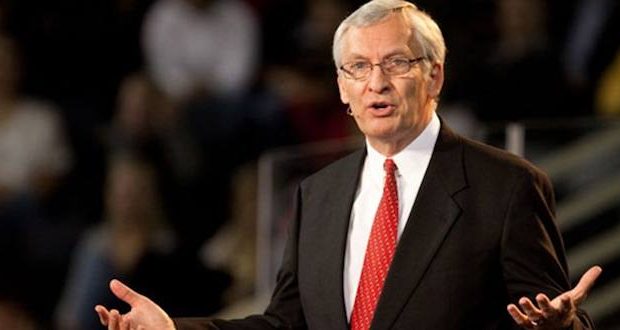 Leith Anderson, the retiring president of the National Association of Evangelicals (NAE), has always liked the word “evangelical” as a description of his faith. As the line between religion and politics blurs, however, he questions whether it does harm as well as good.

“I like the word ‘evangelical,’’ he said in a Religion News Service story. “I would like it to stand for what I think it has always stood for. But if people want to abandon the term, let them abandon the term. That’s really not what matters. What really matters is their faith and their practice.”

READ: What is the preferred new name for Evangelicals?

Anderson, who has been NAE president since 2006, has worked to help people understand the diversity of what and who evangelicals are. He’s done so in the face of public polls showing that “white evangelicals” are among the most ardent supporters of President Donald Trump and his pro-life and other biblical policies.

The longtime pastor wants evangelicals to be defined by their faith — not their politics.

“I want the standard to be what the Bible teaches, not what the polls report,” he said.

John Fea, professor of history at Messiah College, said Anderson has successfully balanced the NAE’s stances — advocating for comprehensive immigration reform, welcoming refugees and opposing racism while supporting traditional marriage and opposing abortion. But Anderson, whom Fea called a “quiet spokesman” with a pastoral heart, has been overshadowed by fellow evangelicals Franklin Graham and Jerry Falwell Jr. Those two often are seen as public faces of evangelicals and more likely to be quoted in the media.

But the NAE has its own problems with numerous critics. In 2003 the group held a “Consultation on Evangelical Christian-Muslim Relations” where it publicly rebuked Franklin Graham, Pat Robertson, Chuck Colson, Jerry Falwell, and Dr. Jerry Vines for their statements condemning violent elements of Islam.

In 2007 the organization delved into the scientific debate and endorsed “climate change” while urging Congress to move on it to save the earth. In an official statement it called for “fundamental changes in values, lifestyles, and public policies required to address these worsening problems before it is too late.” It even went so far as holding a meeting in Morocco, one of the world’s worst persecutors of Christians, to work with Muslims to save the world from climate change. Nothing was said about Christians sitting in Moroccan prisons.

These and other examples have left critics asking where the organization’s priorities are even as the NAE continues to focus on the election of Donald Trump, asserting it as a problem for everyday evangelicals.

“It’s a very awkward place,” said Fea, author of “Believe Me: The Evangelical Road to Donald Trump.” “It doesn’t fit well in talk radio or the talking heads screaming at each other on cable news.”

Under Anderson’s leadership, NAE worked with LifeWay Research to develop a statistical understanding of the diversity among U.S. evangelicals and found that 44 percent of African Americans, 30 percent of Hispanic Americans and 29 percent of whites can be defined as evangelical.

“So the reality is, in absolute numbers there are a lot more white evangelicals, but in terms of if you meet somebody in the street, an African American Christian is much more likely to be an evangelical,” he said.