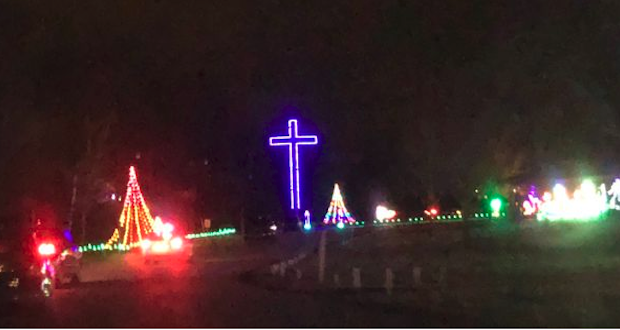 Ozark will move cross after pressure from out-of-state group

Ozark, Missouri is bowing to pressure from a group that regularly sues local governments and will move a cross from a public park.

Under pressure from the Wisconsin-based Freedom From Religion Foundation, city officials in Ozark announced that the cross that was on display at the Finley River Park will be moved to private land located at the south end of the park to avoid a lawsuit from the atheist group.

The land that the cross is being moved to is owned by the Christian County A&M Society and is regularly used by the Finley River Saddle Club Arena.

“The city of Ozark has been working diligently with our partners to find the best resolution regarding the cross in the Finley River Park,” a statement posted to the town’s Facebook page reads. “In striving to balance the court of law with the court of public opinion, we have identified a solution that will relocate the cross from its current location on city-owned property to a privately owned parcel of property.”

According to the city, the proposed new location is “not on property owned or leased by the city of Ozark” in any way.

“There is no specific timeline for this relocation as the details regarding implementation of this plan are still being determined,” the statement reads.

FFRF, which advocates for a strict separation of church and state and regularly pressures municipal governments and school districts, sent a letter to the town in November arguing that including the cross (which at night is lit up in blue) in the town’s holiday lights display on public property was a violation of the Establishment Clause of the First Amendment to the U.S. Constitution.

In her letter, FFRF attorney Rebecca Markert cited federal court decisions against the display of religious symbols on public property. Such rulings include the 1985 Seventh Circuit ruling in ACLU v. The city of St. Charles, Illinois.

Initially, the city responded on Dec. 11 in a statement agreeing with FFRF’s assertion that the cross was a violation of the First Amendment and suggested that leaving the cross on public property would “result in a lawsuit that we will not win.”

The city later amended its statement to explain that despite the warning from FFRF, the cross would remain part of the lights display. Ozark’s updated statement was issued after citizens voiced their disapproval with the city’s response to FFRF.

The city maintained that the cross would remain in place until “due diligence can be completed regarding this matter.”

Now that Ozark officials have agreed to move the cross off public property, FFRF is calling it a “step in the right direction.”

“From the beginning, we’ve asked the city of Ozark to remove this cross or direct that it be moved to private property where it would be more appropriately displayed,” FFRF attorney Rebecca Markert said in a statement. “FFRF is pleased to learn that the city finally agreed to relocate the cross to private property. This is a good step in honoring the separation between state and church and a victory for the Constitution.”

Some residents voiced their approval with the solution.

“[T]hank you so much for resolving this issue without totally dismantling the symbol! And thank you to the private land owners!!!” one Facebook user, who attends Ozarks Technical Community College, wrote. “We the people are so grateful for you!”

At least one commenter accused the city of caving to “outsiders.”

The cross structure in question was built so that the horizontal arms could be lowered at the end of the holiday light display. According to Springfield News-Leader, the town’s immediate solution was to leave the giant cross erected but lower the horizontal arms so that it was not shaped like a Latin cross.