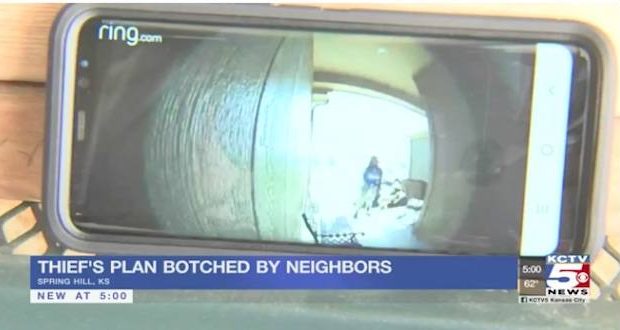 An area package thief, stealing deliveries from front porches, fled without the stolen goods after doorbell cameras tipped off neighbors.

People in the neighborhood say, first, she tried to scam them, according to KCTV5 News.

In this typically friendly neighborhood, John Heinen and his neighbors look out for one another. They also keep an eye on things. Nearly everyone on Heinen’s street has a doorbell camera.

“She wasn’t very professional,” Heinen says. “She was asking ‘Have I bugged you about this?’”

They watched her go door to door before she came back. That was when the Heinens became suspicious.

“She wasn’t really selling anything,” he said.

Heinen started seeing posts from his neighbor’s cameras showing the woman peeking in doors and stealing packages off porches.

Enough houses had video that police had no trouble arresting the woman before she even left the street.

Police say they were able to retrieve everything that was stolen, even some packages that had been thrown in neighbors’ yards.

Heinen is glad his house didn’t buy what the woman was selling, and that his neighbors kept an eye on their cameras.

“Everything is so high tech nowadays,” Heinen said. “I don’t know how people think they can get away with it.”

Previous: Jake Tapper admits that Trump did not call neo-Nazis and white supremacists ‘very fine people’
Next: The cure for our culture of contempt: Love your enemies