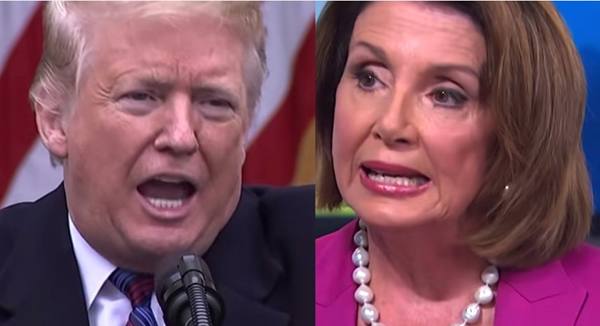 With House speaker Nancy Pelosi suggesting to the President he was not welcome on the House floor to give the State of the Union due to security reasons while the government is partially closed, and suggesting they agree on a later date, President Trump originally suggested he might go elsewhere to give the address. Then he decided to go ahead and do it as scheduled, since Pelosi didn’t actually dis-invite him, and both the Secret Service and the Department of Homeland Security assured everyone that there was indeed no problem with security.

Then, Pelosi late Wednesday formally notified President Trump that the House will not authorize him to deliver his State of the Union address before Congress until the government reopens.

“I am writing to inform you that the House of Representatives will not consider a concurrent resolution authorizing the President’s State of the Union address in the House Chamber until the government has opened,” Pelosi wrote in a letter to the president.

Earlier Wednesday, Trump had said in a letter to Pelosi that he would be accepting the speaker’s original invitation to give the address in the House. Pelosi rescinded her invitation after the partial government shutdown began, citing security concerns she said were created by the furloughing of personnel.

“I will be honoring your invitation, and fulfilling my constitutional duty, to deliver important information to the people and Congress of the United States of America regarding the State of our Union,” Trump wrote.

The president said Secret Service and Homeland Security officials had informed him there was “absolutely no problem regarding security with respect to the event.”

“It would be so very sad for our country, if the State of the Union were not delivered on time, on schedule, and very importantly, on location!” Trump wrote.

“I’m not surprised,” Trump said at the White House after Pelosi’s letter was released. “It’s really a shame what’s happening with the Democrats. They’ve become radicalized. They don’t want to see crime stopped.”

Pelosi’s decision is a “great blotch on the country that we all love,” Trump said. “She doesn’t want Americans to hear the truth.”

Later Wednesday evening, Trump ended the standoff by tweeting that he would postpone the event.

“As the Shutdown was going on, Nancy Pelosi asked me to give the State of the Union Address.” he tweeted. “I agreed. She then changed her mind because of the Shutdown, suggesting a later date. This is her prerogative – I will do the Address when the Shutdown is over.”

“I am not looking for an alternative venue for the SOTU Address because there is no venue that can compete with the history, tradition and importance of the House Chamber,” he added in a second tweet.

“I look forward to giving a ‘great’ State of the Union Address in the near future!” he concluded.

The shutdown, which broke the record for the longest in U.S. history, entered its 33rd day on Wednesday, as 800,000 federal workers remained without their paychecks. The Senate has scheduled votes for Thursday on two bills designed to end the shutdown. One is backed by Republicans and the president and includes more protections for young immigrants as well as Trump’s request for $5.7 billion to fund construction of a border wall. The other, backed by Democrats, funds the affected government agencies without including border-wall funding. 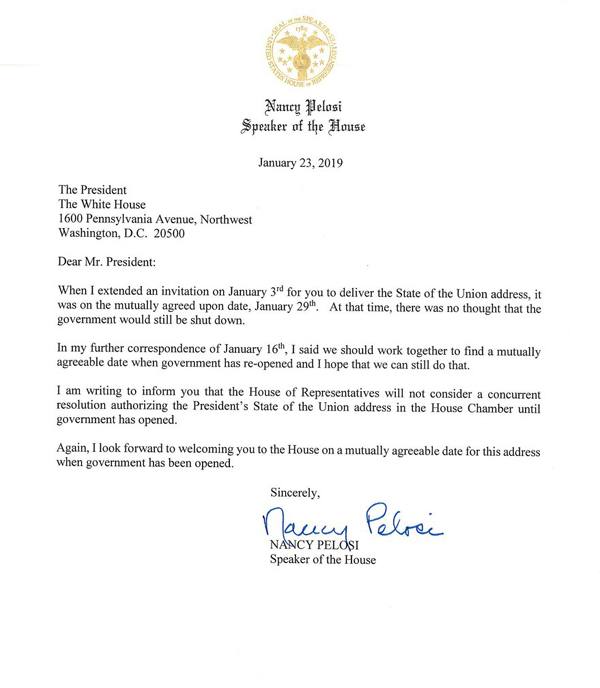