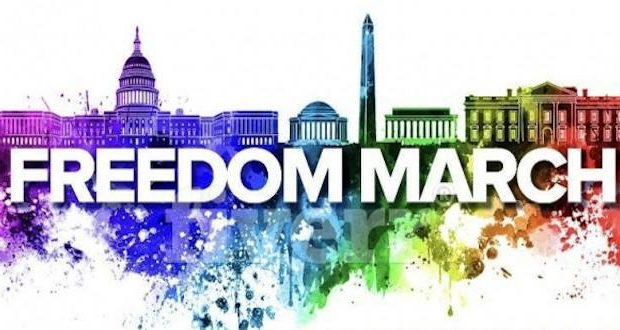 People who left LGBT lifestyle to rally in Washington

Former lesbian, gay, bisexual and transgender men and women,  including an Orlando Pulse nightclub shooting survivor, will gather in the nation’s capital for a worship event next weekend. They plan to proclaim how Jesus Christ liberated them from the LGBT lifestyle.

Attendees from across the nation will assemble at the National Sylvan Theater May 5 for what is being called Freedom March.

Daren Mehl, president of the group Voice of the Voiceless, says he sees the event as “an opportunity for those of us who have a new life with Jesus to come together in fellowship and praise Him for the love and grace available to everyone who seeks it [and] to testify publicly of the life-changing grace available to leave the LGBT identity for something greater,” he told The Christian Post on Friday.

Mehl, 40, is a Minnesota native who identified as a gay man for approximately 10 years. Today he is married to a woman and has two children. He will also be at next Saturday’s march.

“Jesus instructs us to love others as we love ourselves,” he said when asked what he hopes this event communicates to the LBGT community, many of whom have been wounded by religion.

“When anyone spews hate toward another person they are clearly not operating according to the Holy Spirit,” Mehl said. “It is extremely sad when this happens and I hope that [Christians] would be convicted of their sin and repent and reconcile with those they hurt.”

He said that when he encountered the Gospel his entire value system, purpose for living, and beliefs about who he is changed, including his sexual identity.

“Jesus asked me to lay down my identity at His feet and surrender it for a new one in Him. I decided the gay label and lifestyle didn’t align to my desired identity as a Christian. Trying to align my choices in behavior to my Christian identity took years of struggling, and sometimes it was quite painful,” he said.

He believes this Freedom March is necessary to showcase the many formerly LGBT lives that Jesus has transformed and to encourage those who are struggling with their sexuality and are seeking answers, many of whom often feel they are alone.

“They are not alone,” he stressed.

Luis Javier Ruiz, a survivor of the June 2016 massacre at the Pulse nightclub in Orlando, Florida, where 49 people were murdered by Omar Mateen in what was at the time the worst mass shooting in modern American history, will be participating in the May 5 march.

“I should [have] been number 50,” Ruiz wrote on his Facebook page Friday.

“Going through old pictures of the night of Pulse a memory were (sic) my struggles of perversion, heavy drinking to drown out everything and having promiscuous sex that led to HIV. [T]he enemy had its grip and now God has taken me from that moment and has given me Christ Jesus. I’ve grown to know [H]is love in a deeper level.”

“I should [have] been number 50,” he reiterated, “but now I have the chance to live in relationship and not religion, not just loving Christ but being in love with Christ and sharing [H]is love. I know who I am and I am not defined with who the enemy says I used to be but who Christ Jesus says I am.”

Several of Freedom March’s speakers and worship leaders are featured in the film “Here’s my Heart: A Documentary of Surrendering to Freedom,” which chronicles the stories of men and women who left homosexuality and transgenderism behind for a new life in Jesus.

Elizabeth Johnston, who’s also known as The Activist Mommy and who has over half a million followers on Facebook, will be one of the event’s speakers. She said on Friday that many LGBT activists have tried to diminish the voices of those who left homosexuality because their voices present the most powerful refutations of the “gays are born that way and can’t change” argument.

Johnston added that recently proposed legislation in the state of California, AB 2943, which was approved by the state Assembly last week and purports to describe “sexual orientation change efforts” as an “unlawful business practice,” further proves that LGBT activists want to silence anyone who is not fully supportive of their agenda.

“What they don’t seem to realize, is that no law will ever silence the truth that gnaws at their consciences every day,” Johnston said.

She emphasized that the Freedom March will be attended by all kinds of people around the globe who have lived lives and known the destruction of sexual sin and gender confusion.

“They know what it’s like to want help and freedom from the emptiness and addictions of the gender-confused lifestyle, but not know where to turn,” she said, adding that she hopes meaningful, loving relationships are forged.

“We can’t wait to see the fruit from it. When a person truly surrenders their life to Jesus Christ, all things are made new.”

Tagged with: lgbt march on washington