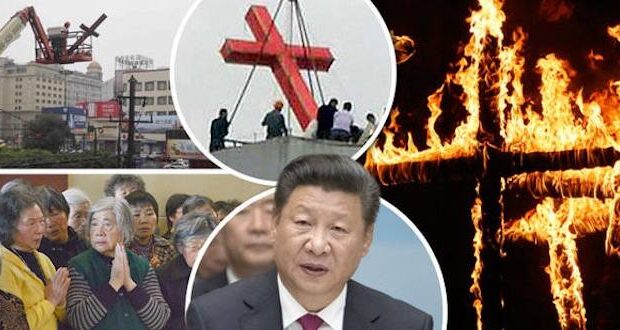 Religious persecution in China has intensified over the past year as the regime continues with its “decades-long war on faith,” Secretary of State Mike Pompeo said on June 10 while presenting his department’s annual assessment on the religious freedom record around the world.

“The Chinese Communist Party is now ordering religious organizations to obey CCP leadership and infuse communist dogma into their teachings and practice of their faith,” Pompeo, a Christian, said in the press briefing.

“The mass detentions of Uyghurs in Xinjiang continues. So does the repression of Tibetans and Buddhists and Falun Gong and Christians,” he continued.

The State Department has labeled China a “country of particular concern” since 1999 for its freedom violations.

The atheist regime has exercised tight control over religious activities, allowing five state-sanctioned religious organizations to operate under its control with exclusive rights to hold worship service. Believers outside of state-approved organizations frequently face arrests, harassment, and torture. The regime has also initiated a religious “sinicization” drive in an effort to make the religious doctrines conform with the Chinese Communist Party line, such as requiring churches to recite the national anthem before singing Christian hymns, the report noted. The Commnist regime has also re-written the Bible.

“Communism seems to have difficulty abiding alongside religious and freely operating religious entities. It’s atheistic by nature and its organization just can’t seem to really tolerate the free expression of faith,” he said.

Unveiled on June 10, marking the 21st year since Beijing created its gestapo-like security apparatus—the 610 office—the extensive report on China’s record dedicated a notable portion to the persecution of Christians, Muslims and the spiritual group Falun Gong.

Over the past two years, hundreds of churches have been bulldozed and dozens of Christian pastors and church staff arrested. In some cities, churches that seat upwards of 6,000 worshippers have been destroyed as being “illegal”, meaning they did not have a communist permit to  operate.

As for the the Falun Gong movement, they have come under severe treatment, including forced organ removal and torture.

Police arrested around 6,100 and harassed nearly 3,600 adherents in 2019, while at least 96 died as a result of the persecution, the report said, citing Minghui, a U.S.-based website tracking the CCP’s persecution of the practice.

Guo Zhenxiang, 82, was arrested for handing out information pamphlets at a bus stop in eastern Shandong Province and died hours later; Li Yanjie from northeastern Heilongjiang Province fell to her death while trying to escape from police who were forcing their way into her apartment.

The religious freedom report also made a special note about the growing list of evidence alleging that the Chinese regime is murdering prisoners of conscience and extracting their organs for sale.

A February 2019 study published in the medical journal BMJ found 440 of 445 Chinese studies failing to report whether organ donors for the research had given their consent. Another study, published in BMC Medical Ethics in 2019, concluded that Beijing likely falsified its organ donation data, with data that “conforms almost precisely to a mathematical formula.”

Minghui has documented anecdotal evidence supporting the claim. He Lifang, a 45-year-old Falun Gong practitioner from Qingdao in Shandong province, who died less than two months after his arrest, had a sewn-up incision on his chest and an open incision on the back.

Brownback also warned that the Chinese regime seems to be pioneering a future of oppression with its use of high-tech surveillance.

For the estimated 1 million Muslim minorities incarcerated in concentration camps, a “virtual police state” involving cameras, identification, and social credit systems is likely awaiting them once they get out of detention, Brownback said, relaying concerns of such heavy-handed suppression spreading beyond the region.

“Maybe it sounds like a broken record, but China is just such a big player in this space in such a negative way that it’s hard to overlook, and they’re an exporter of their ways and their technology,” he said.

Even if they didn’t export this technology and just did it to their own people, “that’s one you just can’t really take your eyes off of,” he said of the Chinese regime.