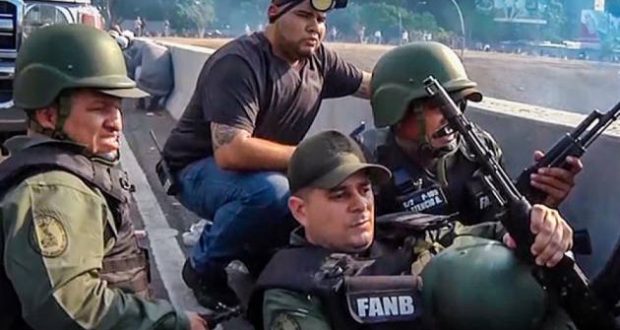 Some Venezuelan troops have defected to support Juan Guaido against dictator Nicolas Maduro.

Pompeo says US military may intervene in Venezuela

As Venezuela’s dictator Nicolas Maduro directs his military to kill pro-democracy protesters, violence continues to escalate with the possibility of US troops intervening at some future point.

The country’s leading politician trying to unseat him from power is urging his countrymen to keep up the pressure with some calling for outside help.

In a video posted on social media, opposition leader Juan Guaidó urged Venezuelans to take to the streets again today and called on the country’s powerful military to join the people seeking change.

Guaidó claims the military, seen as a linchpin to whether the embattled Maduro remains in power, is deserting his government.

Overnight, the head of Venezuela’s secret police broke ranks with Maduro, saying the time had come to “rebuild the country” and “seeknew ways of doing politics.”

White House National Security Advisor John Bolton says Venezuela’s minister of Defense, Supreme Court chief justice and commander of the Presidential Guard have pledged to support Guaidó whom the US views as the rightful leader of Venezuela.

Bolton is urging them to make good on their promises.

The White House is endorsing Guaidó’s latest bid to oust Maduro, and warning Cuba to stay out of the South American nation – threatening to impose new sanctions on the communist country for its role in the crisis.

The US says about 20,000 Cuban troops and agents are working to prop up the Venezuelan dictator.

“Obviously we are seeing the Venezuelan people strive to get a government that they control, not have a government controlled by an authoritarian military regime that in turn is controlled by Cubans and other forces external to Venezuela,” said Bolton.

Meanwhile, US Secretary of State Mike Pompeo is claiming that Maduro was about to relinquish power, and even had a plane on the tarmac ready to leave the country for Cuba, but was urged by Russia to stay.

“We literally had Nicolas Maduro getting prepared to get on his airplane and head out of the country before he was stopped. Stopped really at the direction of the Russians,” Pompeo said during an gala and award ceremony in Washington, DC Tuesday evening.

Russia’s meddling is a clear sign to the administration that it’s pushing against America’s Monroe Doctrine, which limits the influence of foreign governments in our hemisphere.

While past American presidents may have neglected the doctrine, Trump’s stance indicates the Monroe Doctrine is alive and well.

In an interview with Fox Business Network, Pompeo said the US is prepared to take military action in Venezuela if necessary.

“Military action is possible,” Pompeo warned. “If that’s what’s required, that’s what the United States will do.” He added the administration would prefer a peaceful transition of power in the country.

All this is happening as Guaidó released a short video early Tuesday showing him standing alongside members of the military claiming he had the support of the country’s soldiers and urging Venezuelans to take on Maduro.

That led to several fierce skirmishes between opposition and government supporters, including a moment when an armored military vehicle was seen running over civilians.

But by nightfall, the socialist dictator appeared still in control of the country and pushed back against Pompeo’s claims that he was preparing to leave.

With his minister of Defense and other military officials by his side, a defiant Maduro said all attempts to remove him from office had failed and vowed to punish those trying to overthrow his government.

“There are videos of all kinds. We know who they are, we have to look for them,” Maduro warned

Tagged with: military pro-democracy protests us military us troops venezuela