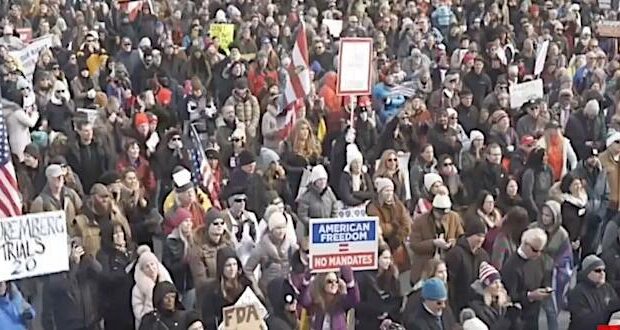 Thousands gathered in Washington DC to protest vaccine and other mandates. Photo: Video.

Washington DC is the latest world capital to be hit by protests over mandates and covid restrictions. Weekend protests on Sunday saw thousands of protestors march in a “Defeat the Mandates” rally against mandatory vaccination orders and regulations over COVID-19 that courts have already been ruling unconstitutional.

Tens of thousands gathered in Brussels, Belgium where police in riot gear used water cannons and tear gas in clashes.  Vaccine mandates were the target of protests across Germany where, in Dusseldorf, police say 7,000 marched through the streets. Dozens of other German cities also protested. In London police say its possible hundreds of thousands joined protests on Saturday with dramatic footage showing protesters dancing to Pink Floyd’s Another Brick in the Wall. The protests were led by healthcare workers. British Prime Minister Boris announced he may soon ending all covid mandates.

While protests and rallies around the globe, including Africa, Australia and Europe, have received considerable coverage in world media outlets, they have been virtually ignored by news organizations in the United States.

DONATE: Our independent and accurate news needs your donation to continue

The rally featured prominent lockdown critics such as Dr. Robert Malone, Dr. Peter McCullough and Dr. Paul Marik. Organizers stressed that they are not anti-vaccine but are standing against strict regulations pushing vaccination or heavily restricting people and businesses over the spread of COVID-19.

“Now there’s not a single person here who is against the broad use of vaccines as we use them in our clinical practice,” McCullough said during remarks at the Lincoln Memorial. “We have a circle of medical freedom. You have the freedom, you and you alone have the autonomy over your body.”

Allowing the government to infringe on that “circle of medical freedom” also would cripple social and economic rights, such as religious freedom and employment, he said.

Two Russian immigrants to the United States marched at the rally because “we know what it means to feel free,” one said. “And we know what it feels not to be free. That’s why we’re here.”

Despite claiming during the 2020 campaign that he would not make COVID-19 vaccinations mandatory, Biden has pursued vaccine mandates for federal employees and contractors and health care workers. The president also has ordered that large employers either vaccinate or regularly test their employees for COVID-19.

Many of Biden’s orders are yet to be implemented after being stayed by various federal courts. An order mandating that hospitals vaccinate their workers to remain eligible for a number of Medicaid and Medicare programs is still in effect after the Supreme Court declined to stay it earlier this month.

The Washington rally comes as most of the Biden vaccine mandates have been found unconstitutional by the Supreme Court.