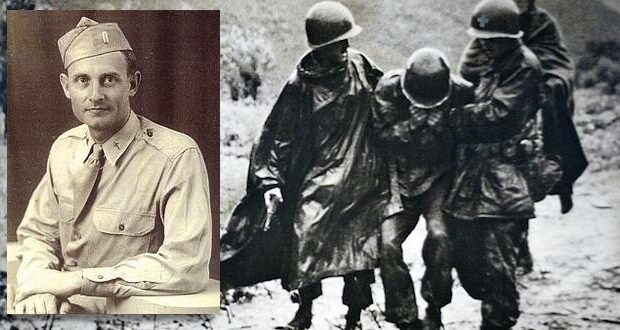 The remains of a hero Catholic priest from Kansas who died in a POW camp in Korea, were returned to his family during a ceremony this week.

U.S. Defense officials gave the remains of Rev. Emil Kapaun, who is being considered for sainthood, to his family and officials with the Catholic Diocese of Wichita, including Bishop Carl Kemme. The ceremony took place in Hawaii.

The remains will be flown back to Kansas, where they will be taken first to  Kapaun’s hometown – before being taken to Wichita, where a funeral is scheduled for Sept. 29.

Kapaun was captured in 1950 while attending to soldiers during the Korean War. He died of pneumonia at the POW camp while continuing to minister to fellow prisoners.

The Priest was awarded the Medal of Honor for heroic actions during the war in Korea. Although a retreat had been ordered, the priest stayed behind to tend the wounded and comfort the dying, and continued to make his rounds even as hand-to-hand combat ensued. He convinced an injured Chinese officer to negotiate the safe surrender of American forces. And then, seeing a Chinese soldier about to execute a wounded GI, Kapaun calmly pushed aside the enemy and carried the U.S. soldier away.

In 1993, the Catholic church named him a “Servant of God,” which began the lengthy process of canonization.

The Defense Department’s POW/MIA Accounting Agency announced in March that Kapaun’s remains had been identified at the agency’s laboratory at Pearl Harbor in Hawaii.