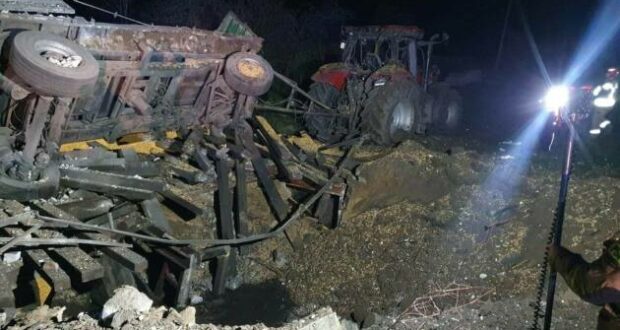 Two people died Tuesday afternoon after a Russian ballistic missile struck Przewodów, Poland, killing two workers at a facility. The Polish town is near the border with Ukraine.

The attack, whether accidental or deliberate, is a major escalation in the largest war on European soil since World War II.

Mueller did not immediately confirm the information on the missile strike but said the meeting was held due to a “crisis situation.”

A senior US intelligence official confirmed to AP that Russian missiles crossed into Poland. The eastern European country bordering Ukraine is an EU and NATO member.

Local outlets are reporting that Polish police, the prosecutor’s office, and the army are on-site in Przewodów. Firefighters from a local unit confirmed an explosion had killed at least two people.

“Firefighters are on the spot, it’s not clear what has happened,” said Lukasz Kucy, officer on duty at a nearby firefighters’ post.

Przewodów, a town of 710 residents in eastern Poland, is situated some 80 miles, or 130 kilometers, southeast of the regional capital Lublin and 4 miles from Ukraine.

Russia was pounding cities across Ukraine with missiles on Tuesday in attacks that Kyiv said were the heaviest wave of missile strikes in nearly nine months of war. The attacks have targeted mostly residential high-rise buildings and infrastructure as the country goes into a cold winter.

NATO could institute some type of military response to Russia and officials from the organization’s 30 member states may have an emergency meeting on Wednesday.

Viktor Orban, Hungary’s prime minister, also called a meeting of his defense council, according to his spokesman.

The deadly incident marks the first time a Russian attack on Ukraine has killed someone inside neighboring NATO territory since the start of the war.

Jens Stoltenberg, NATO’s secretary general, has previously claimed its 30 members would defend and protect every inch of its territory in response to Russia’s invasion of Ukraine.

This is a breaking story.