Home / Entertainment / ‘Safety’ – so much more than a sports movie 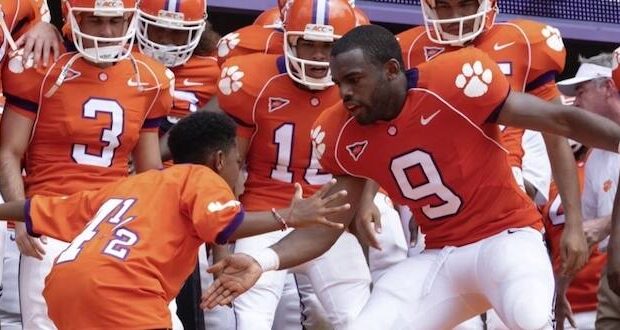 Safety is based on a real story about Ray McElrathbey who played for Clemson in 2006. He did so while serving as guardian for his 11-year-old brother, who became something of a secret unofficial mascot for the team.

The film, released to streaming Dec. 11, is a pretty great story even without the Disney treatment, but director Reginald Hudlin expands its scope to talk not just about the McElrathbey family, but the notion of what the word family itself actually means.

When McElrathbey shows up for his first football meeting at Clemson University, his coaches launch into speeches about the proud tradition of Tigers football—a tradition-filled with success, sacrifice and teamwork. They tell Ray Ray (as he’s known) and the rest of the freshmen about how, before each home game, players will run down the hill toward the east end zone and touch Howard’s Rock, one of the university’s most sacred traditions. And if players aren’t willing to “give it 110%, keep your filthy hands off of it.”

Sacrifice, Ray Ray hears again and again. Sacrifice for your team. Your coaches. Your school. “You must sacrifice,” the coach says.

The red-shirt freshman sacrificed plenty to get to Clemson. His dad split a long time ago—when his little brother Fahmarr was still asking for help putting on his shoes. His mother’s a drug addict, so she’s often gone, either physically or mentally. But even so, Ray Ray overcame his upbringing and sacrificed much to land at Clemson with a football scholarship.

He takes the “student” part of being a “student-athlete” seriously, too. Instead of taking a litany of can’t-fail classes like most football players, he dives into a heavy load of psychology classes. He aims to do more than play football: He wants to graduate and set himself up for a life off the gridiron. And he hopes that all those psych classes might help him help his mom, too.

But he keeps getting calls from Fahmarr, whom everyone just calls Fay. Ray Ray thinks his 11-year-old bro just wants to talk, and Ray Ray just doesn’t have the time. But then, finally, he learns the truth: Their mom got caught for possession again. She’s been gone for a week.

Ray Ray rushes back to Atlanta and gets some mixed news. The good: His and Fay’s mom, Tonya, has been accepted to a rehab program, all expenses paid. The bad: It’s a 30-day, live-in program. Fay will be in foster care for a month.

“I’ll take him,” Ray Ray tells the counselor as he leads Fay away.

But how? The school dorms don’t allow 11-year-olds. If anyone found out, the coaches would probably kick him off the team.

But Ray Ray’s willing to risk it. He’s Fay’s brother, after all. Family. And what do you do for family? You sacrifice for them, that’s what.

Yeah, Ray Ray already knew all about sacrifice. He didn’t need some coach to tell him. But a student? An athlete? And now a mother and father, too?

This freshman’s about to take a graduate-level course for the word.

Most people would say they’d do “anything” for their family, and it might be true. But Ray Ray has the opportunity to walk the walk.

Already dealing with a demanding practice schedule and a back-breaking academic load, Ray Ray carves out time to care for his little brother—spiriting him off to a school bus so Fay doesn’t fall too far behind, keeping him out of trouble (as much as he’s able) and instilling some tough love along the way. Ray Ray’s commitment to Fay only climbs as the movie goes on. “I’m Fay’s brother, his father and everything else that he needs me to be,” he says.

But—and this is something of a spoiler if you’re not aware of the real story behind the movie—Ray Ray learns that he doesn’t have to do it all alone.

You can’t hide an 11-year-old in a college dorm room forever, of course. Ray Ray’s roomie, Daniel (Clemson’s third-string kicker), is the first to become an accomplice. Then a few other teammates are brought into the fold, helping out where they can.

When Ray Ray’s secret is discovered by the whole team, his coaches are pretty angry at first. But when they see the devotion that Ray Ray has for his brother—and the loyalty that some team members show to Ray Ray—they work with the safety to make it happen. They facilitate a move off-campus. A coach’s wife begins shuttling Fay to school. And when the community hears about Ray Ray’s story, many of them rally to help as well.

This ultimately complicates matters: The NCAA, in an effort to avoid any appearance of shady, under-the-table payments to student-athletes, doesn’t allow schools or communities to provide any tangible help to student-athletes at all. Even giving Fay rides to school could be construed as some sort of “payment.” So when Ray Ray goes to the NCAA to ask for the variance, his team rallies behind him.

When Ray Ray asks a handful of fellow Clemson players about his secret, his friends promise to keep it. Moreover, they’ll help Ray Ray in any way they can. “As long as you’re family, so’s the kid,” one says. Later, when a school official tells a Clemson coach not to risk the NCAA’s wrath for just one kid, the coach shoots the guy down. “He’s not just one player to me,” he says. “He’s part of a family. I’ll take that risk any way of the week.”

For years, Ray Ray thought that it was just he and Fay against the world. They’d have to do it alone if they were to do it at all. And throughout the film, we see times when Ray Ray pushes away help, or the possibility of help.

But finally, he realizes that that’s not the way forward. “Clemson taught me it’s OK to open your heart and accept help,” he says. In our culture of self-sufficiency, it’s a lesson that many of us could probably internalize a bit more.

Safety continues a strong tradition found in Disney’s film catalog—that of the inspirational sports movie. This movie indeed inspires. And while some of the themes here are kinda gritty, Safety deals with them without slathering on a lot of excess muck.

A movie that feels both clean and real? That’s not as rare as a college football player caring for his 11-year-old brother. But it’s rare enough to celebrate.

–Reviewed by Paul Assay | Focus on the Family

Previous: Push to cancel student debt ignores why college is so expensive
Next: China and its ‘tainted’ cotton picked by persecuted religious minorities