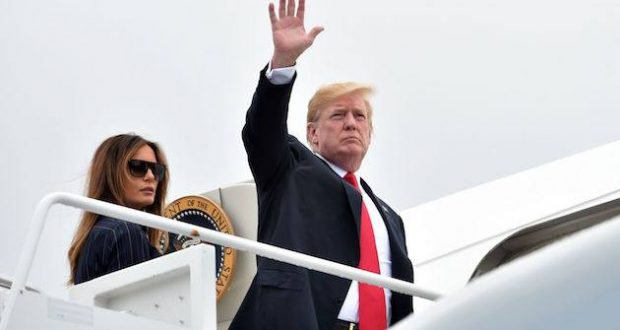 Kansas City will host the leader of the free world today as, for the first time since taking the office, President Donald Trump comes to town.

The president is scheduled to attend multiple events and bring with him an intense level of security that will affect traffic unlike few previous visitors.

On Tuesday, the president will address over 10,000 veterans at Municipal Auditorium as part of the Veterans of Foreign Wars’ 119th Annual Convention.

Trump is expected to focus on healthcare and the United States Department of Veteran’s Affairs. The president has delivered on key campaign promises to veterans during his tenure through efforts like allowing veterans to find specific outside care for specialties that the VA cannot cover.  The president has received praise from both vets and medical professionals for his efforts to reform the VA.

Trump’s overhaul of the VA started in June when he signed legislation to expand access for veterans to VA-funded care in the private sector.

The details of how and when this will happen is still up in the air. Trump is expected to hear questions about the policy from veterans during his time in Kansas City on Tuesday.

Trump’s was originally scheduled to deliver his speech from the Kansas City Convention Center but officials with the VFW moved the location Monday evening.

After his speech to the VFW, Trump will attend a fundraiser for the United States Senate campaign of Missouri Attorney General Josh Hawley.

The White House on Monday night released the president’s full schedule of events for his time in Kansas City.

Here’s a look at the time line, all times are CDT:

During the president’s visit, various roads will be closed for security reasons.

It is still unclear which route the president will take to get from the airport to the downtown area and back. In fact, the Missouri Department of Transportation says, the president’s route is secret, even to them.

The United States Secret Service has said they will create a rolling roadblock to keep traffic away from the president at all times. They say street closures began as early as 4:30 a.m. Tuesday.

Ahead of the president’s arrival, officials say the best options to get downtown from the airport are through the Bond Bridge or by taking the John Jordan “Buck” O”Neil Bridge.

The Kansas City Police Department has also announced that parts of downtown Kansas City will be closed during Trump’s visit. They say the shutdown will occur after the morning rush hour and will be reopened before the evening rush hour. Pedestrian and vehicle traffic will not be allowed in or around the area.