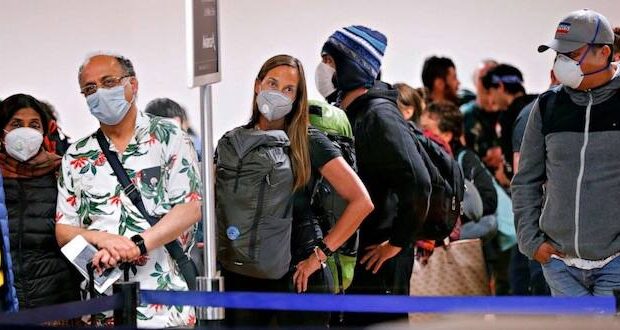 Americans at the main airport in Peru.

It’s unprecedented in American history – an “airlift” to rescue and bring home U.S. citizens stranded overseas by the coronavirus. State Department officials are working to bring more than 50,000 Americans after they requested help.

The department has so far helped bring home more than 9,000 U.S. citizens from 28 countries, and hopes to double that number in the coming days. Over 50,000 have requested help.

Getting them home is a complex challenge, with dozens of airlines grounded or with services cut right back – often at short notice – and many airports around the world closed or operating minimally.

“The department has never before undertaken an evacuation operation of such geographic breadth, scale, and complexity,” State Department spokeswoman Morgan Ortagus said this week. “We are using all the tools at our disposal to overcome logistical and diplomatic challenges and bring Americans home from hard-to-reach areas and cities hardest-hit by the virus.”

Americans abroad are being urged to enroll in the department’s Smart Traveler Enrollment Program, to receive alerts and information from embassies in real time.

“We’re committed to bring home as many Americans as we possibly can.”

“This is truly a global operation,” Brownlee said, noting recent flights from everywhere from Haiti to Ghana to Ukraine.

“We’re planning on another 66 flights over the next nine days or so,” he said. Around 9,000 Americans were identified for those flights, although “we hope to move those numbers up.”

More than 1,000 of the 9,000-plus repatriated so far have returned from Peru, and the U.S. was seeking authorization for more flights from Peru this week.

Peru has posed particular challenges, Brownlee explained, because COVID-19 infections in the civil aviation authority prompted the shutdown of the civilian airport, “and they’re trying to run it on a bit of a shoestring from the military side of the airport.”

To help the Peruvians, the U.S. has cleared out a hangar there used by the department’s Bureau of International Narcotics and Law Enforcement Affairs, and repurposed it as a space to process people safely.

Brownlee said around 4,000 Americans were known to be stranded and trying to get out of Peru, and possibly as many as 7,000 needing help to leave Ecuador.

“There are some commercial options coming out of Ecuador and we’re seeking to enhance those, and also to look at charter flights going into Ecuador beginning very soon.”

U.S. authorities were generally getting the same short-notice news as everyone else was about services shutting down, he said.

That was why the message was so important that if Americans were “in a place now where they’re not prepared to stay for an indefinite period of time, that if their home is somewhere else, they should get themselves home quickly while there still are options. Because in so many cases, they’re finding out that tomorrow morning they’re not going to be able to get out.”

The department’s travel-focused Twitter account is posting dozens of alerts, informing Americans in countries across the globe about possible alternative options.

One informs Americans stranded in Belize that the international airport is closed for commercial flights for at least 30 days. “We are compiling a list of persons seeking to leave Belize,” it says, linking to instructions for those interested.

Americans stranded in Honduras are informed that if they are already on the list for U.S. government-coordinated flights “and receive a call about seats available, be prepared to make a decision immediately.”

Alerts draw Americans’ attention to commercial services that may still be operating: A flight from Buenos Aires to Miami – “the ONLY remaining direct flight to the United States” – has been moved back from Thursday to Friday; a Serbian airline is offering seats at no charge on a charter flight from Belgrade to Los Angeles; there are still seats available on a flight on Friday from Kyiv, Ukraine to JFK – “the second flight this week and may be the last opportunity for a while.”

There are also U.S. military evacuation flights, such as one being planned from Panama for Monday.

A senior State Department official stressed earlier this week that all Americans returning home from overseas will be subject to screening at airports and recommendations for 14 days of self-isolation.

Secretary of State Mike Pompeo said Tuesday he was proud of the State Department team working to ensure the safe return of stranded Americans.

“This was a crisis in transportation that we’ve not seen,” he said on the “Washington Watch” radio show hosted by Family Research Council president Tony Perkins.

“I want everyone to know that we’re working night and day to get the right resources in place to get them home just as quickly and safely as we can,” Pompeo said. “It’s a mess with airports closed and bus lines and travel closed in many of these countries, even lockdowns in some of them. This was an enormous problem. We’re working to get everybody back just as quickly as we can.”

Previous: Ford, GMC, Honda to re-open plants in April
Next: Chart of current coronavirus cases and deaths in U.S.