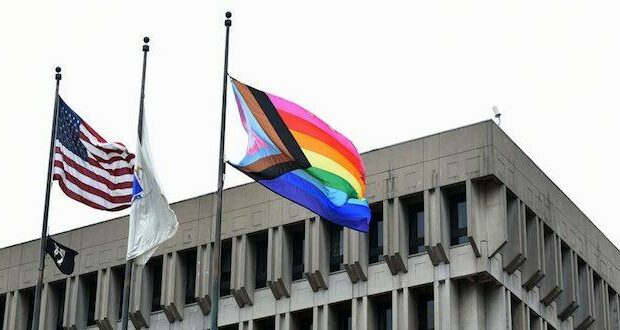 Boston City Hall features flags from around the world and the gay pride flag, above. But they refused to allow the Christian flag.

In a rare unanimous decision the Supreme Court ruled in favor of religious speech on May 2. The case involved the city of Boston refusing a Christian flag to fly at city hall while it permitted national flags and flags about historic events, LGBT, BLM and other causes at city hall. The nation’s highest court said it was an unconstitutional example of government censorship.

The court’s opinion (pdf) in the case, Shurtleff v. Boston, court file 20-1800, was written by outgoing Justice Stephen Breyer, 83, who is expected to retire and will be replaced by Judge Ketanji Brown Jackson when the court’s current term ends. Oral arguments in the case, an appeal from the U.S. Court of Appeals for the 1st Circuit, came Jan. 18.

Justices Brett Kavanaugh, Samuel Alito, and Neil Gorsuch each filed a separate opinion concurring in the judgment of the court.

Petitioner Harold Shurtleff runs Camp Constitution, which offers classes and workshops on U.S. history and the Constitution. Camp Constitution, also a petitioner, was formed “to enhance understanding of the country’s Judeo-Christian heritage, the American heritage of courage and ingenuity, the genius of the United States Constitution, and free enterprise,” according to the petition filed with the court.

Three flagpoles adorn Boston City Hall’s entrance. Atop one flies the U.S. flag, and below it is a flag honoring missing soldiers and prisoners of war. The Massachusetts flag is on a second flagpole. A third flagpole usually flies Boston’s flag, but sometimes flags are hoisted to honor or commemorate causes, individuals, historic events, and foreign countries such as the People’s Republic of China or Turkey. Sometimes, the tertiary staff hosts flags about military battles, victims of crime, or the LGBT community.

But in 2017, Boston refused to let Camp Constitution display a flag containing a Christian cross, claiming it would be a constitutionally impermissible endorsement of Christianity by the city. The petition states that Boston official Gregory Rooney told the group the city “maintains a policy and practice of respectfully refraining from flying non-secular flags.”

Rooney said the policy was created out of concern for “the so-called separation of church and state or the Constitution’s establishment clause.” He worried that the Camp Constitution flag “was promoting a specific religion” and “didn’t think that it was in the city’s best interest to necessarily have that flag flying above City Hall.”

In the high court’s opinion, Justice Breyer wrote that when the government “encourages diverse expression—say, by creating a forum for debate—the First Amendment prevents it from discriminating against speakers based on their viewpoint.”

“But when the government speaks for itself, the First Amendment does not demand airtime for all views.”

“The line between a forum for private expression and the government’s own speech is important, but not always clear. This case concerns a flagpole outside Boston City Hall. For years, Boston has allowed private groups to request use of the flagpole to raise flags of their choosing. As part of this program, Boston approved hundreds of requests to raise dozens of different flags. The city did not deny a single request to raise a flag until, in 2017, Harold Shurtleff, the director of a group called Camp Constitution, asked to fly a Christian flag. Boston refused.”

The Supreme Court concluded that “on balance, Boston did not make the raising and flying of private groups’ flags a form of government speech. That means, in turn, that Boston’s refusal to let Shurtleff and Camp Constitution raise their flag based on its religious viewpoint ‘abridg[ed]’ their ‘freedom of speech,’” Breyer wrote, quoting the First Amendment.

Previous: Suspect in murder of retired police officer David Dorn to stand trial in July
Next: Leading artists will perform on broadcast from National Day of Prayer in Washington