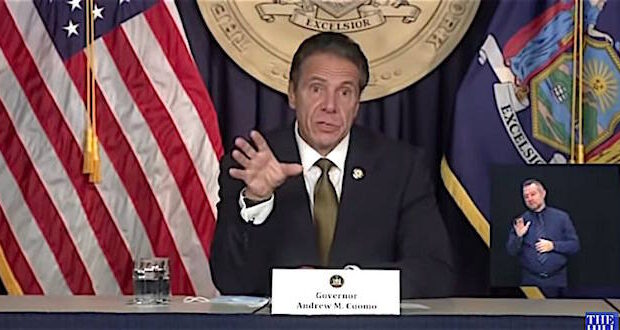 Religious freedom was handed a victory late Wednesday when the U.S. Supreme Court blocked New York Gov. Andrew Cuomo and other officials from limiting religious gatherings. The ruling has implications for other Covid restrictions across the country.

Lawsuits brought by the Roman Catholic Diocese of Brooklyn and Agudath Israel of America triggered the ruling.

The order had prompted protests in the streets with one synagogue having been levied a $15,000 fine.

Cuomo had mandated that attendance at religious services remain at 10 people or under in so-called red zones and at 25 or under in orange zones.

New York officials have created a color-coding system to mark what levels they believe the pandemic has affected certain areas.

READ: COVID by the numbers

“Stemming the spread of COVID-19 is unquestionably a compelling interest, but it is hard to see how the challenged regulations can be regarded as ‘narrowly tailored,’” the Supreme Court said in the unsigned majority opinion.

“They are far more restrictive than any COVID-related regulations that have previously come before the Court, much tighter than those adopted by many other jurisdictions hard-hit by the pandemic, and far more severe than has been shown to be required to prevent the spread of the virus at the applicants’ services.”

The plaintiffs were likely to prevail on First Amendment ground, the court ruled.

Justice Neil Gorsuch, a Donald Trump appointee, said in a concurring opinion that the government “is not free to disregard the First Amendment in times of crisis.”

“At a minimum, that Amendment prohibits government officials from treating religious exercises worse than comparable secular activities, unless they are pursuing a compelling interest and using the least restrictive means available,” he added.

Justice Brett Kavanaugh, a Trump appointee, also concurred, noting that temporary injunctions were warranted but that the Nov. 25 decisions were not final.

Bush appointee John Roberts, the court’s chief justice, said in a dissenting opinion that “there is simply no need” to grant injunctive relief.

“Numerical capacity limits of 10 and 25 people, depending on the applicable zone, do seem unduly restrictive. And it may well be that such restrictions violate the Free Exercise Clause. It is not necessary, however, for us to rule on that serious and difficult question at this time,” he alleged.

Previous: Helping African journalists share the saga of Christian persecution
Next: Franklin Graham finds plenty of things for which to be thankful this year