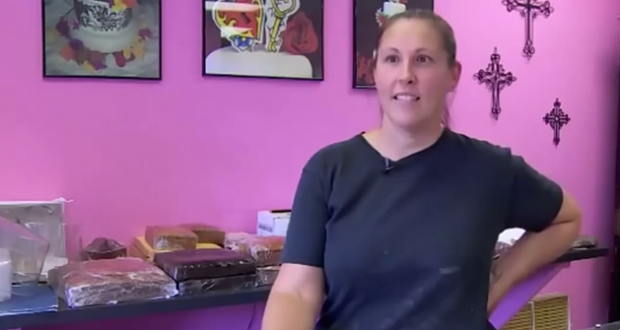 Melissa Klein in her cake shop.

The Oregon official who last week fined a Christian couple $135,000 for declining to bake a cake for a same-sex commitment ceremony in 2012 also ordered them to stop talking about their Sweet Cakes religious liberty fight.

Oregon Bureau of Labor and Industries (BOLI) Commissioner Brad Avakian ruled interviews Aaron and Melissa Klein gave to Christian and conservative media outlets violated the state’s law against advertising any intent to discriminate against homosexual customers. His order demands they “cease and desist” making comments about the case. But the couple’s lawyer claims the whole process was biased and flawed, and said the ruling demonstrates how an elected official can abuse his position to stamp out beliefs with which he disagrees.

The Kleins plan to appeal.

At the March hearing, prosecutors claimed the Kleins violated and intended to continue violating Section 409 by appearing on a television show and a radio program to discuss the case. 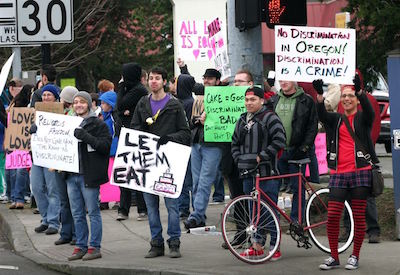 Activists protest against the Kleins outside the Sweet Cakes shop.

According to the lawsuit, in September 2013, Aaron Klein told the Christian Broadcasting Network (CBN): “I did not want to be a part of her marriage, which I think is wrong,” and “I have faith in the Lord. He has taken care of us up to this point and I’m sure he will in the future.” CBN showed an image of a sign on the door of the closed business that read, “Closed but still in business. This fight is not over. We will continue to stand strong.”

In another interview, Family Research Counsel’s Tony Perkins asked Klein if he and his wife had considered in the past how they would respond to a request for a same-sex wedding cake. “It was one of those situations where we said, ‘well, I can see this is going to become an issue but we have to stand firm,” Klein said. “It’s our belief and we have a right to it, you know.’”

The administrative law judge who reviewed the case found the Kleins did not violate the city’s advertising policy. But Avakian disagreed in his final order, ruling the interviews proved “prospective intent to discriminate” and “constitute a ‘communication’ that was ‘published’” in violation of Section 409. He ordered the couple to “cease and desist violating” the law.

“[The interviews] are not descriptions of past events as alleged by [the Kleins],” Avakian wrote. “[The Kleins] stated their position in these communications and notify the public that they ‘don’t do same sex weddings,’ they ‘stand firm,’ are ‘still in business’ and will ‘continue to stay strong.’”

Conservative commentators were quick to label the ruling a “gag order” against Christians publicly defending their belief that marriage is between one man and one woman.

“The order doesn’t say you can’t talk to the press,” the couple’s lawyer, Anna Harman, told me. “It says ‘cease and desist’ from violating the law. But the statements that the commissioner said violated the law were very benign. That makes it look like you better stop [using those words] publicly.”

Charlie Burr, a spokesman for the state commission, told The Oregonian a cease and desist order is common in language used in discrimination cases.

“The Kleins are free to voice their disagreement with the ruling or Oregon’s anti-discrimination laws in general,” Burr told The Oregonian. “The cease and desist order means that they should refrain from discriminating against future customers.” 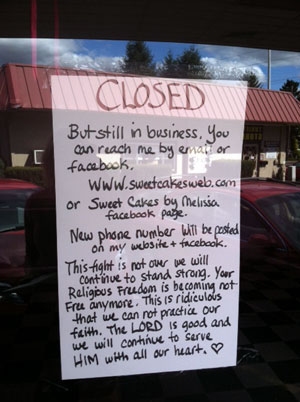 But Harman noted that until her clients receive an amended order, they are bound by what the order currently says to stop doing, which is using phrases like “we will stand strong.”

Although they’re not supposed to talk about their case, the Kleins must pay their $135,000 fine immediately, or rack up 9 percent interest for any delay. Harman said she is working to get a stay order so the damages are not payable until a judge can consider the couple’s appeal.

Part of the appeal will focus on the Bureau of Labor and Industries (BOLI) hearing process.

“The commissioner is an elected official—not a real judge,” Harman said. “The commissioner, the administrative judge, the prosecutors, everyone involved in the process is an employee of BOLI. There is also no opportunity to be heard by a jury.”

Because the commissioner has final say in the matter, he is an example of an elected official using his position to root out thought and speech with which he personally disagrees, Harman said.

During the hearing, one of the agency’s witnesses said Bowman and Cryer had talked about how to best use the Kleins’ case politically, Harman revealed. The defense asked the judge to reopen the record so they could depose the witness to find out what he meant and have time to do a records request. The judge denied that request and said the defense should have asked for records earlier in the case.

“How could we have known [earlier]?” Harman asked. “I guess we were supposed to assume from the beginning that the agency wasn’t playing fair.”

A month before last week’s ruling, The Daily Signal broke a story about BOLI having ongoing communications with Basic Rights Oregon, an LGBT advocacy group, during the Kleins’ case. Reporters obtained communication between the two groups through a public records request, which could show bias in the case.

Harman plans to address the commission’s conflict of interest during the appeal process.

While awaiting appeal, the Kleins are confident in waiting on God.

“This [ruling] effectively strips us of all our First Amendment rights. According to the state of Oregon, we neither have freedom of religion or freedom of speech,” they posted on Facebook.

Previous: UCC Denomination No Friend of Israel
Next: Brownback moves to protect pastors