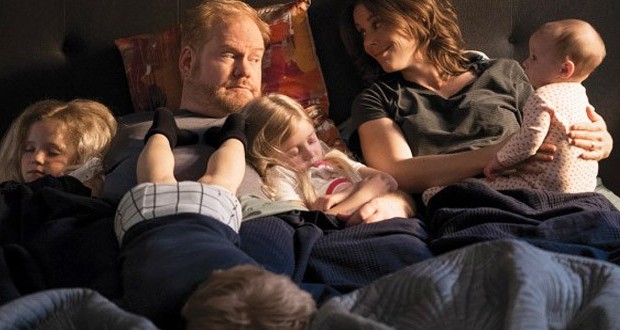 Jim and Jeannie Gaffigan on their new TV show, their big family, and ‘clean’ comedy.

The Jim Gaffigan Show premiered on TV Land on July 15—and Gaffigan’s reputation as a “clean Christian comedian” is on trial in the first episode. His wife (Ashley Williams) asks him to pick up a Bible from church, a gift from their priest, before he heads to do his stand-up set. The Bible turns out to be a massive tome that Jim has to carry around the rest of the night under the scoffs from his expletive-dropping comedian friends.

Gaffigan has been a successful stand-up comedian and author of best-selling books like Dad Is Fat. He and his wife Jeannie have five children and live in a two-bedroom apartment in Manhattan. The show is based on their lives: Jim plays the dad, and actors play the wife and children. The Gaffigans are co-writers and have creative control: Jim told me, “We frankly wouldn’t get the opportunity to do the stories we’re doing on CBS or NBC. … It’s not that they’re against creativity, it’s just by committee.” Jim said the networks suggested a lot of changes to the premise, like cutting the number of his children from five to two, or making his character single so he could date.

Jim and Jeannie met through comedy and began writing material together, then fell in love and got married. “Having a writing partner is rare, and I was reluctant to write with anyone,” Jim said—but “Jeannie is so good.” Jim said he didn’t intend to have the “clean Christian comedian” label, but he also did not plan on people associating him with food jokes. (One of his most famous bits is about the glories of bacon.) Jim said some of his favorite comedians are “not necessarily clean,” but “I don’t curse because it’s not really necessary to curse when you’re talking about donuts.”

One of the main characters in the show is a priest, a character based on the priests the Gaffigans know in their Manhattan parish. The priest, who often counsels Jim, is not a bumbling oaf—a choice the Gaffigans made because they were tired of “priest jokes.” Since the Gaffigans live in New York, not a predominantly Christian city, the show includes edgier characters.

From the few episodes I’ve seen, the show is “family friendly” but addresses the virtuous and the not virtuous parts of life in the Big Apple. In one episode, Jim’s comedian friend Dave has not the most gentlemanly intentions toward Jeannie’s sister Maria. Jim and Jeannie, unsuccessfully stalking the pair as they’re on a date, end up at a strip club. The bouncer won’t let them in, but then he recognizes Jim and thanks him for keeping his comedy clean. The show has these sardonic twists that keep it from being too much like a remake of a ’90s family sitcom. Instead it seems like a cleaner version of Louie, the very crude but often profound FX show by comedian Louis C.K.

Jeannie said, “You can’t really win” when talking about faith in the media. She recalled a recent headline that said their show was about “real life, not religion,” which prompted her Twitter followers to criticize her for differentiating religion from real life.

Concerning her faith, Jeannie said, “It’s just something that we are. … We made the decision not to hide the different sectors of our life. There’s the church and the comedy club.”

If viewers don’t like this show, Jim said, “There are only two people to blame, Jim and Jeannie. And it’s Jeannie’s fault.”