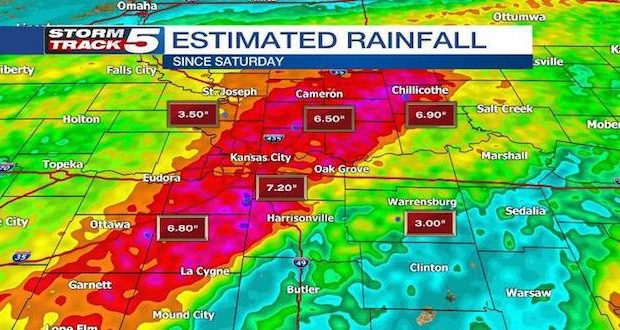 The rain cup runneth over in greater Kansas City area

As rain continues to move through the metro area, creeks, streams and rivers are at their capacity. Heavy rain in the Kansas City metro and across Missouri & northeast Kansas has caused river levels to spike, shutting down roads and threatening some homes and businesses in low-lying areas.

The Missouri River and other waterways are already flooding in the state’s northwest and the Mississippi River’s levels are rising fast, especially in the northeast of the state.

Parts of Missouri could get thunderstorms through Wednesday, which would add water to the river basins. But storms that might dump up to 2 inches of rain in parts of Wisconsin and Iowa could further swell rivers downstream and be of greater concern in Missouri, Mark Fuchs, a hydrologist with the National Weather Service, said Tuesday. He said the additional water would likely extend the duration of flooding, not worsen the crests.

“This is not an historic flood, at least not yet,” Fuchs said.

That doesn’t mean it isn’t causing trouble. Nearly 70 Missouri roads are closed due to high water, mostly in northwestern Missouri. The closures include stretches of U.S. 24 and Missouri 48.

The Missouri River will crest Thursday in St. Joseph at nearly 9 feet above flood stage, threatening a residential area, the weather service said. The Missouri also is expected to overflow agricultural levees near Glasgow on Friday, which could flood some homes. Stretches of the Katy Trail hiking and biking path in central Missouri are expected to flood.

The worst is yet to come along the Mississippi River. Towns such as Hannibal, Louisiana and Clarksville are expected to face significant flooding by the weekend. Buyouts since the historically bad 1993 flood have mitigated potential damage, but the high water could get into scattered homes and businesses.

In Hannibal, flood gates were installed to protect the Mark Twain sites and the rest of downtown, and a popular high school marching band festival was pushed back a week.

The Mississippi is expected to reach flood stage Thursday in St. Louis and crest nearly 6 feet above flood stage on Monday.

A flood watch is in effect through 7 am on Wednesday for most of northeast Kansas. More on-and-off again chances for showers and storms will exist for the remainder of Monday into Tuesday. An additional 1 to 3 inches of rain is expected,with some locally higher amounts possible. As that rain continues to pile up over already saturated ground, some gradual flooding could become more of a concern.

Drier conditions and even more prominent breaks of sunshine finally makes its return for Wednesday.

Even though sunshine emerges at times during the day on Wednesday, temperatures actually take bit of a tumble. 60s and 70s for Tuesday turn into 50S for Wednesday.

High temperatures in the 50s and 60s will be the theme for the second half of the week, with overnight lows in the upper 30s and 40s.

Things stay dry for Wednesday and Thursday before additional chances for showers roll right back in for Friday and Saturday.