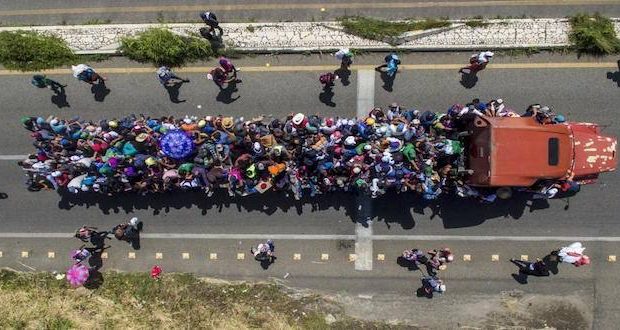 As American troops head to the southern border, migrant marchers are now being put on dozens of semis to speed up their journey to the United States.

Defense Secretary Jim Mattis has authorized the use of troops and other military resources at the U.S.-Mexico border, U.S. officials said on Friday, bolstering President Donald Trump’s efforts to protect the nation from certain elements that have embedded themselves among migrants marching toward the United States.

The officials, who spoke on condition of anonymity, said Mattis’ authorization did not include a specific number of troops, something that would be determined at a later point, and was not itself a “deployment order.”

The Pentagon did not comment on potential troop numbers, which U.S. officials have told Reuters could be at least 800 active-duty troops and begin deploying as soon as Tuesday.

The U.S. military said Mattis had authorized the military to provide “mission-enhancing capabilities” to U.S. Customs and Border Protection, including engineering support to help build temporary barriers and housing.

U.S. pilots would provide transportation for civilian government personnel, it said in a statement.

One U.S. official told Reuters that some of the U.S. troops could be called in to assist with traffic and crowd control on the U.S. side of the border, potentially helping to manage demonstrators. Migrants had previously broken down the fencing that separates Mexico from Guatemala and pushed their way past Mexican troops protecting their own border.

Officials stressed that U.S. troops would not be engaged in any law enforcement activities, something that is prohibited under U.S. law, and instead would focus on support roles in areas like infrastructure and logistics.

The migrant influx comes at a bad time for Democrats in the mid-term elections as polls indicate a vast majority of Americans are against policies that allow, and some say encourage, continued illegal migration and the breaking of American border security laws. Since the Trump administration was forced to end the policy of separating children from parents who illegally entered the country, illegal immigration has surged in recent months. News outlets have reported drug dealers and traffickers using the children of others to gain entry at the border along with legitimate families seeking asylum.

On Friday, Mexico offered temporary identification papers and jobs to migrants who register for asylum in that country, stepping up efforts to halt the advance of thousands of people from Central America heading to the U.S. border.

The caravan, which began in Honduras nearly two weeks ago and picked up other Central Americans along the way, has grown to over 15,000. The president of Guatemala announced last week that his country had discovered and arrested over 100 individuals connected to Middle-Eastern terrorist organizations like ISIS.

Trump and his fellow Republicans have pointed to the marchers as an example of America’s weak border security system and the need for a wall to help protect southwestern states from the inflow of drugs and sex traffickers.

Trump pledged during the 2016 presidential race to build a wall along a large portion the southern U.S. border with Mexico while reinforcing the existing fence and wall that exists in other areas.

In April, frustrated by lack of progress on the wall, Trump ordered the National Guard to help secure the border. Many people do not realize the wall is actually being built in areas with the highest influx of illegal immigrants.

As for the deployment of troops, the top Republican on the committee, Representative Mac Thornberry, said it was consistent with prior deployments by former presidents Barack Obama and George W. Bush.