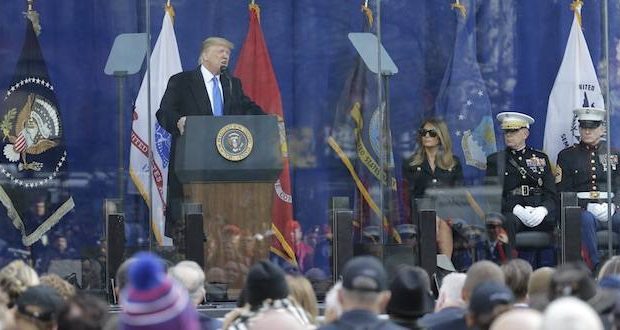 President Trump is the first to speak at a Veteran's Day Parade. Screenshot.

You probably missed any mention of it in the news media this week. History was made during Veterans Day celebrations the nation’s largest city. Donald Trump became the first president to ever attend the huge parade in New York.

“Today we come together as one nation to salute the veterans of the United States Armed Forces, the greatest warriors to ever walk the face of the earth. Our veterans risked everything for us. Now it is our duty to serve and protect them every single day of our lives,” Trump said.

The Commander-in-Chief was met with loud applause from a crowd estimated to be over 100,000 people.

It is common for the American president to be formally invited to the Veterans Day event, but Trump is the first president to accept the offer.

Prior to his presidency, Trump was a supporter of the parade. In 1995, he offered to donate $200,000 to help the parade when it was struggling financially.

“It is truly an honor to come back to New York City right here in Madison Square Park to be the first president ever to attend America’s parade,” he said in a speech Monday.

“This morning as more than 30,000 patriotic Americans line the streets of Manhattan, we carry on a noble tradition that began one century ago. In 1919, the people of this city filled block after block to welcome home General Pershing and his 25,000 American soldiers after victory in World War I. Just a few years before, many of those soldiers had boarded ships not far from here at Hoboken Port.”

“More than 4 million Americans fought in the great war and more than 116,000 made the ultimate sacrifice. At the 11th hour of the 11th day of the 11th month in 1918, the armistice was declared. The war had come to an end and the allies achieved a great, great victory,” he added.

The White House said the president has made it a priority to serve and support the veterans who protect our country.

“Every year since, on November 11, we have shared our nation’s deepest praise and gratitude to every citizen who has worn the uniform of the American Army, Navy, Air Force, Coast Guard and Marines.”

“To every veteran here with us, to the thousands preparing to march on Fifth Avenue, it will be really something, and to the 18 million veterans across our country, the first lady and I have come to express the everlasting love and loyalty of 327 million Americans.”

President Trump said he’s also working to ensure that veterans receive the resources they need to return to civilian life with dignity and security.

“To each veteran of the war, the glory of your deeds will only grow greater with time. This city is graced by your presence, this nation is forever in your debt and we thank you all.”

“You are the reason our hearts swell with pride, our foes tremble with fear and our nation thrives in freedom.”

Trump was met with a small, but vocal, group of protesters who’s changes were drowned out by New Yorkers shouting “USA!”