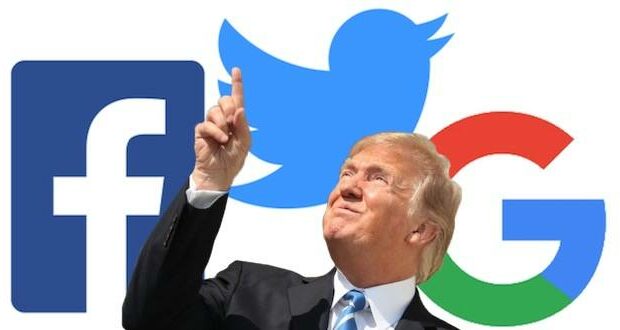 Facebook, Twitter and Google are the defendants in a censorship lawsuit being brought by Donald Trump, it was announced Wednesday.

Trump said he was serving as lead plaintiff in the class-action suits, claiming he has been wrongfully censored by the companies which completely silenced him, shutting down his accounts on Facebook, Twitter, and YouTube.

The suits were filed in U.S. District Court for Florida’s southern district.

Trump – who was joined at the press conference by other Americans who have suffered Big Tech censorship – said he was asking the court for an immediate halt to social media companies’ illegal, shameful silencing of the American people.

“We’re demanding an end to the shadow-banning, a stop to the silencing and a stop to the blacklisting, banishing and canceling that you know so well,” Trump said at a news conference at his Bedminster, New Jersey golf course.

“Our case will prove this censorship is unlawful. It’s unconstitutional and it’s completely un-American,” he added.

Trump said his suit will ask the court to impose punitive damages on the three social media giants.

“We are going to hold Big Tech very accountable,” the former president said, hinting about other lawsuits that may follow.

Trump was suspended from Twitter and Facebook after unarmed rioters stormed the U.S. Capitol building on Jan. 6. While it has been described as a deadly assault, the only death that day was a protester shot and killed by a capitol police officer. The Big Tech companies said they banned Trump after (wrongly) alleging he incited the violence. Currently, he can not post on multiple platforms, but allies have launched a new social media site called GETTR on July 4th. It is speculated he may open an account on the new platform.

The companies claim that under Section 230 of the 1996 Communications Decency Act, they are exempt from liability for the material that users post. The law, which provides a legal “safe harbor” for internet companies, also allows social media platforms to moderate their services by removing posts that, for instance, are obscene or violate the services’ own standards, so long as they are acting in “good faith.”

But Trump and other politicians – Democrats and Republicans alike – have long argued that Twitter, Facebook and other social media platforms have abused that protection and should lose their immunity because the First Amendment freedoms of Americans are at stake.