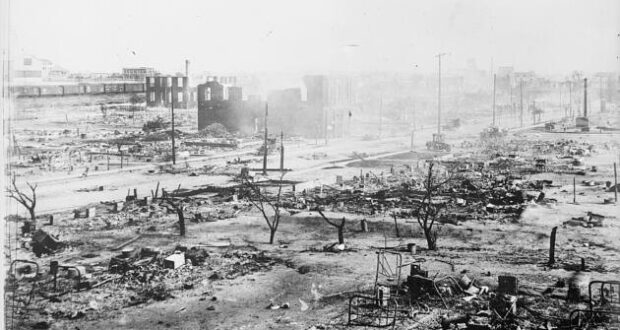 Six congregations gathered at First Baptist Church of North Tulsa to commemorate the city’s race riots of a century ago. That’s when, in 1921,  a white mob destroyed at least a half-dozen other churches while burning and leveling a 35-square-block neighborhood known as “Black Wall Street.”

According to a later Red Cross estimate, during the Tulsa Race Riots some 1,256 houses were burned; 215 others were looted but not torched. Two newspapers, a hospital, school, a library, churches, hotels, stores and 200 other Black-owned businesses were among the buildings destroyed or gutted by fire. Estimates of dead range from 36 to 300 though most historians settle on lower numbers from the number of funerals and graves at the time.

Even so, the riots are second to the New York Draft Riots of 1863, which killed at least 119 people, according to History.com.

It remains one of the nation’s deadliest episodes of racist violence with a mob estimated at between 5,000 and 10,000 people.

Similar commemorations took place at many houses of worship throughout Tulsa and across Oklahoma on Sunday, a day ahead of the official centennial dates the commission that organized the centennial designated Sunday as Unity Faith Day. It provided a suggested worship guide that each congregation could adapt, including scriptures, prayers and the singing of “Amazing Grace.”

Particularly at historically black churches, speakers emphasized a call for financial reparations, both for the few centenarian survivors of the massacre and for the wider, economically struggling North Tulsa area, where the city’s black population is largely concentrated. 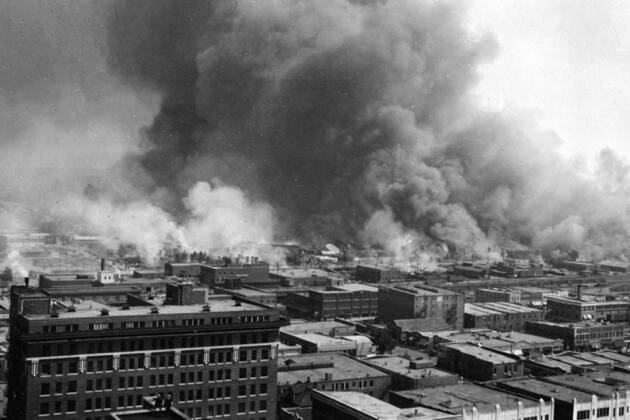 The Rev. Robert Turner, pastor of nearby Vernon African Methodist Episcopal Church, which also traces its roots to before the massacre, echoed that sentiment in an interview before his own church’s service. “It’s not a tragedy that’s left in 1921,” he said. “It’s a tragedy that continues to live each day that lacks justice.”

Pastor Deron Spoo of First Baptist Church of Tulsa, a Southern Baptist church less than two miles from the similarly named North Tulsa church, told his congregation that the massacre has been “a scar” on the city. The church has a prayer room with an exhibit about the massacre, accompanied by prayers against racism. It includes quotations from white pastors in 1921 who faulted the black community rather than the white attackers for the devastation and declared racial inequality to be “divinely ordained.”

Congressman Hank Johnson has introduced a bill that would make it easier for them to seek reparations instead of falling victim to a statute of limitation restrictions. It’s making its way through Congress right now.

“I’m asking that my country acknowledge what has happened to me,” Fletcher said.

“We are not asking for a handout, all we’re asking for is a chance to be treated like a first-class citizen,” Ellis remarked.

Spoo told congregants on Sunday: “While we don’t know what the pastor 100 years ago at First Baptist Tulsa said, I want to be very clear: Racism has no place in the life of a Jesus follower.”

Previous: Here’s the hot-button cases the Supreme Court will rule on this month
Next: Israel may replace Netanyahu with more conservative Naftali Bennett