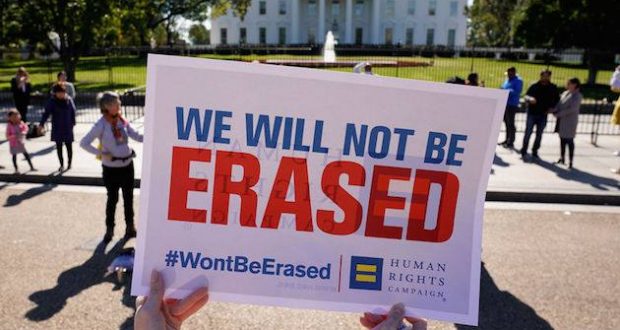 The Trump administration may soon spearhead efforts to define sex and gender according to biology. In a Department of Health and Human Services memo leaked to the New York Times, officials argue the federal government should adopt a definition of sex and gender “on a biological basis that is clear, grounded in science, objective and administrable.”

This move would essentially roll back changes the Obama administration made, which allowed individuals to choose their identity and receive federal protections under Title IX.

According to the memo, HHS proposes that a person’s sex be either male or female and match that of their genitals at birth. “Sex means a person’s status as male or female based on immutable biological traits identifiable by or before birth. The sex listed on a person’s birth certificate, as originally issued, shall constitute definitive proof of a person’s sex unless rebutted by reliable genetic evidence,” the memo says.

The Obama administration gave allowances for the legal definition of gender in education and healthcare, letting individuals claim gender was a fluid choice rather than on biological science at birth. With the protections of Title IX in hand, transgender people sued workplaces and schools claiming discrimination “on the basis of sex.” Lawsuits abounded, and while many were decided in their favor, claiming they had been discriminated against and that Title IX provides a basis for transgender “sex” discrimination, some were not.

Conservatives have since argued “sex” was not the same as “gender identity” and that conflating the two under the Obama administration allowed transgender people to enjoy the protections of Title IX when race, sex, and gender appeared to be totally different issues.

The transgender community is already responding to the HHS memo claiming the Trump administration is trying to “erase them”. The Transgender Law Center released a statement saying, in part, the memo was “transparently a hate-motivated response to these victories. It attempts to rewrite years of progress achieved by advocates under the Obama administration. Here, written out plain, is their attempt to erase our very existence as transgender people. This memo reveals that this administration intends nothing short of our destruction.” The New York Times claims, “The new definition would essentially eradicate federal recognition of the estimated 1.4 million Americans who have opted to recognize themselves — surgically or otherwise — as a gender other than the one they were born into.”

While transgender advocates claim there are several court cases to back up the policy Trump is trying to reverse, conservatives claim judges were merely making “activist” decisions. Furthermore, HHS claims they too are abiding by other court decisions, particularly the rulings of Judge Reed O’Connor of the federal court in Fort Worth, Texas. He has held that “Congress did not understand ‘sex’ to include ‘gender identity,’” something with which conservatives would agree.

However, despite the existence of the memo and the subsequent uproar from one side and applause from another, it’s unclear if HHS will actually implement this change, and if so, how this would play out in public policy. One thing is clear: If the Obama allowances are rolled back, simply defining sex as in accordance with a person’s birth, it would not “erase” transgenders.

Previous: Media ignores Guatemala’s arrest of 100 people linked to terrorists
Next: Shoes: the truth about what we track into our homes