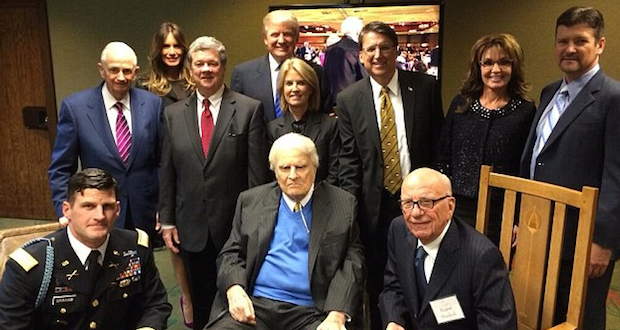 Friends from all over: Billy Graham (seated center) poses with a number of people including Melania and Donand Trump (back left), Sarah and Todd Palin (right) and Rupert Murdoch (bottom right). Trump was invited to sit a the table with Graham during the banquet honoring the preacher.

Who are Donald Trump’s Christian supporters?

New polling shows Donald Trump continuing to surge among the Republican field and even independents and conservative democrats. His strong showing among Christians is a surprise to some and annoyance to others. As a matter of fact, he currently leads among conservative Christians.

“I love Evangelicals,” said Trump, but there are doubters.

If the disconnect between Republican Party leaders and much of the base is evident, it may exist among Christian leaders and the average Christian voter too. Immediately following the televised Republican debate in Cleveland, Trump shot up among Evangelicals in Iowa, which is the first opportunity for candidates to get a head start in their delegate count.

“Many of the candidates running for the Republican nomination are impressive, but Marco Rubio reminds me more of Jack Kennedy every day,” said Richard Land, president of Southern Evangelical Seminary, “Whatever charisma is, he’s got it.”

While a “non-starter” for Evangelical insiders, just like many Washington insiders, Trump has legions outside the fold.

In December, Trump met with dozens of African-American pastors, who shared their surprise that what they heard from Trump personally was not at all what the media was portraying him to be. Many stood with him afterwards and offered their support.

Franklin Graham offered what many believe is Trump’s ultimate appeal — his outsider status, and ability to articulate general contempt for Washington.

“He’s shaking up the Republican Party and the political process overall. And it needs shaking up,” declared Graham.

The Daily Beast published a piece in August titled, “Why Evangelicals Worship Trump.” The piece chronicles some of Trump’s quieter support of Evangelical ministries, including Samaritan’s Purse, and Billy Graham affiliated ministries. Trump spoke to raucous applause at Liberty University in 2012, and reportedly took time visiting campus leaders and students, instead of merely jetting in and out on his plane after his talk. 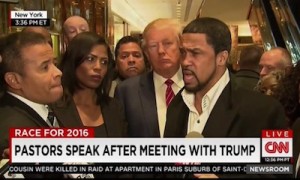 Donald Trump (middle) meets the press with prominent black pastors after a meeting in New York.

“I think long before anyone thought he would seriously run for president, he was making outreaches to Evangelicals and Catholics who are involved in the political process,” exclaims Johnnie Moore, a former media relations manager and campus pastor at Liberty University.

Jerry Falwell, Jr. went so far as to call Trump “one of the greatest visionaries of our time.”

Trump has made similar outreach to Christian leaders such as Tony Perkins of the Family Research Council and Ralph Reed.

“Trump is the result of a Republican leadership here in Washington D.C. that is playing footsies with Barack Obama instead of fisticuffs,” says Perkins. “People are tired of that.”

Others question the support he is getting. Carmen Fowler LaBerge, president of the Presbyterian Lay Committee, argued that Trump’s Evangelical followers are likely the type who have embraced a bastardized version of the Gospel that has more to do with positive thinking and American capitalism than the teachings of Jesus.

“Trump’s ‘evangelical’ supporters are the Christmas-church-going, Protestant work-ethic, Manifest Destiny believing, can-do capitalists. They are in every denomination and none. They think of themselves as Christians but they see no real need to have every aspect of their lives aligned with an arcane morality. Trump is tapping into the spirit and power of positive thinking that pervades the teachings of modern cultural evangelists like Oprah Winfrey and Joel Osteen,” she wrote.

Some Christians are mystified about the support for a man who seems to have attended church little in recent times. Trump has said he is Presbyterian and a member of Marble Collegiate Church.

But regardless of his church attendance or missteps, supporters and observers say they are overshadowed by his authenticity, the establishment backlash and what is perceived by many as failure in Washington. As Peggy Noonan argues in the Wall Street Journal, Trump’s appeal extends far beyond the Republican Party base or politics.

“Now look: when Trump talks about how he doesn’t really ask God for forgiveness except for when he partakes in communion,” wrote David Brody of the Brody File, “that obviously is not the Evangelical textbook answer. But at least they appreciate his honesty and with politicians nowadays that is a valued commodity.”

“Remember, evangelicals hold true to their ‘biblical absolutes,’ so to see a person like Trump let it rip and tell it like it is becomes a somewhat endearing quality to some evangelicals,” says Brody. “Trump takes hits for his boldness, and evangelicals take hits from society for their biblical boldness, too.”

Maybe that is the most important place where they connect.

Previous: Hope, health and healing
Next: With Spring donations, watch out for Planet Aid scam