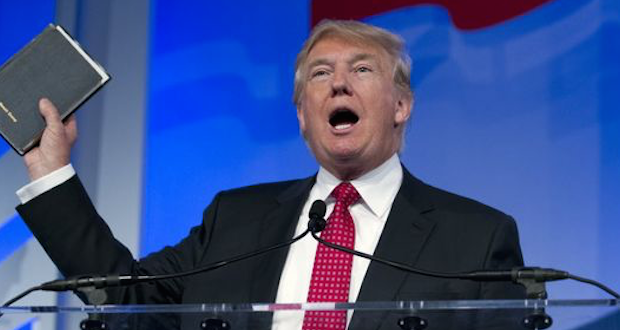 Donald Trump holds his Bible at the Values Voter Summit in September 2015.

After watching Donald Trump maneuver on the presidential campaign trail during these past six enthralling months, I’ve come to the following conclusions: Trump definitely has an appeal to conservative evangelicals, and this seemingly bewildering relationship belongs on the next episode of the Dr. Phil show.  How in the world did this happen?

While evangelicals are not a monolithic group, poll after poll shows plenty of themgravitating Trump’s way. He’ll get a chance to sway more believers Monday when he visits Liberty University, the largest Christian university in the world, and again next month at Regent University, another leading Christian institution, where he’ll appear with founder Pat Robertson.

When voting time rolls around, strong evangelical support could very well mean a top-two finish in Iowa, not too shabby considering the critics who thought Trump would be long gone by now. His polling in South Carolina is also impressive, as is his strength in many of the states in the evangelical-rich South that vote in the crucial March 1 “SEC primary” (nicknamed for the NCAA’s Southeastern Conference). What you have is a path to victory potentially powered by evangelicals.

Explaining this attraction is not as hard as it seems. On the surface, you see the potential warts: three marriages, a pro-choice past, salty language delivered by a New Yorker, and the list goes on. To be sure, Trump would not be Central Casting’s prototype evangelical candidate. Name-calling along with the hefty ego aren’t sought after character traits.

But something is resonating. You see, Trump operates in a world of absolutes where there are winners and losers; there is the right way and the wrong way. In short, it’s a world painted in black and white. Evangelicals see the world in much the same way, in that accepting Jesus is the only way to heaven and the Bible is the inerrant word of God. They are publicly ridiculed for their unbending, non-negotiable approach, just as Trump is widely mocked for his adamant positions. It’s called a common psychological bond.

Read the rest of the article here: Trump’s Evangelical Support

Previous: With Spring donations, watch out for Planet Aid scam
Next: Lost lyrics of Fanny Crosby now expanding her legacy