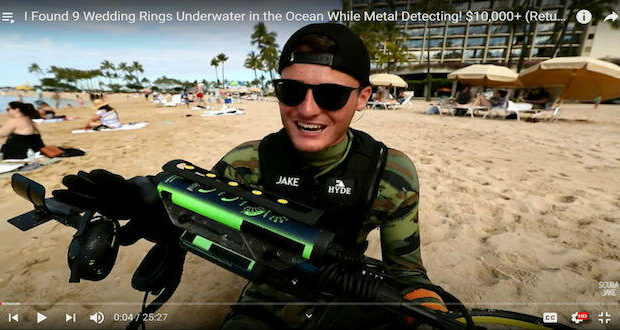 YouTube is becoming the place for families tired of searching Netflix, Amazon Prime, Disney+ or broadcast Tv for something decent to watch, or something they haven’t already seen.

Free to everyone is YouTube. There are now countless of individually-produced shows for every taste, from RVing, to grill cooking, adventure, treasure hunting to raising kids. And everything in between.

Here’s a few worth taking a look at for you or your family. Best of all, they’re free.

Back in 2011, Kristine decided to upload a video of her twins getting ready for bed for friends and family to see. A week later the video had over one million views. Now, Kristine and her family are fulltime YouTubers with close to 10 million subscribers on their channel: Family Fun Pack.

Both Kristine and her husband are kind, loving, nurturing, silly parents who clearly love their children and want what’s best for them. They encourage them to be creative, to play, to enjoy musical instruments and to love learning.

Raising kids has glorious moments … and sometimes difficult or frustrating ones. Parents can get tired, even discouraged at certain points. So the value of a fun, activity-filled channel like this one is to provide ideas and inspiration. And it’s clear that Kristine and Matt have lots of both to share with their millions of viewers.

Crash Course is a YouTube channel started by brothers Hank and Chris Green, back in 2006. At first, their idea was to reach out to teachers and students, providing information about world history and biology. And they did. But things grew pretty quickly, and what began as a humble effort has turned into a thriving educational landing strip.

Knowledge and resources and content oh my. There’s a lot of good here. For parents looking for help explaining something to their kids in school, they might find it here. Or maybe you’re the one struggling with a mathematical concept or theory. Well, I can’t promise this channel will have the answers, but it’s worth a look.

Crash Course’s stated goal is “to help people learn things … because learning is like a little bit of the meaning of life.” That’s a great stance to take toward both learning and life, as long as users also view what they’re discovering through a lens of wisdom, discernment and a grounded Christian worldview.

Wow. That’s a lot of knowledge. And it’s free to all with, of course, internet access.

Welcome to a YouTube channel where you will learn a whole lot about a whole lot: TED-Ed.

This TED Talk derivative, launched in 2011, is an initiative that’s designed for learners of all ages, and it focuses on teachers and students around the world. Here, you will find more than 1,000 high-quality, entertaining videos that teach viewers about concepts and subjects from scientific principles and economics, to history and literature, and everything in between.

Interested in learning about who history’s first recorded author was? Or maybe you want to know what causes an economic recession? Whatever it is you’re looking for, you’ll likely find a video on it.

And to help in your search, these animated videos are broken into categories such as: “Think like a coder,” “There’s a poem for that,” “A day in the life,” “Awesome nature,” Before and after Einstein,” “Math of the impossible” and “Humans vs. viruses,” among others.

Educational content abounds here as learning is the main goal. Questions of all sorts are presented, and each video breaks down answers.

Some of these titles can be misleading, as is common with YouTube. For example, one TED-Ed title reads: “What happens when you die?” But instead of someone talking about what they think about the afterlife, they simply read a poem by Emily Dickinson.

Parents of younger viewers will want to offer guidance and direction on some subjects, such as various cultures’ mythological teachings, for instance. One video focuses on the myth of Baldur, and it talks about that belief system’s prophecies about death. This sort of historical, literature-based content is common, but it could be confusing for younger or less-mature viewers who aren’t yet familiar with other cultures’ spiritual ideas.

Some videos potentially espouse ideas, opinions or worldviews that not all viewers will necessarily agree with.

It’s a sickening moment: that telltale plop of water splashing up to inform you that you’ve just dropped something important, like an iPhone or your glasses or your wallet, into the liquid abyss. For a tantalizing moment, it reflects under the waves—and then it vanishes. Or maybe it’s not until you get back to your hotel room that you look down and realize: “Oh no! My wedding ring is gone!”

But while these treasures might well be lost forever to a normal person, YouTuber Jake Koehler—user name: Dallmyd/Scuba Jake—has spent the better part of the last decade finding them. When possible, he even identifies owners of such diverse things as wedding rings and iPhones, GoPros and other seriously miscellaneous stuff. Sometimes he even has to call the cops.

Since 2011, Jake has been diving in various lakes, rivers and oceans, camera in hand to document his findings. The bubbling, gurgling noises of his scuba regulator create an oddly mesmerizing soundtrack to his otherwise mostly silent videos. He cleans up beer bottles and other cast-off detritus.

But Jake also finds amazing and unexpected things: rings and phones of course. But then there are things like Claymore mines, guns, human bones, remnants of a drug lab, a grenade … even a pickup truck!

The fascinating aspect of watching Jake’s oddly compelling videos is the fact that you start to feel like he might find almost anything.

Jake’s enthusiasm for discovery is practically contagious. He gets excited (we hear through muffled whoops underwater, generally speaking) about everything he finds. And then he surfaces to report on his findings.

When possible, Jake also seeks to return valuables he’s discovered. In fact, his YouTube page even invites people to email him if they’ve lost something important in a given body of water. (Though one suspects he quite likely has more search requests than he can handle.)

Occasionally, Jake uncovers something a bit on the CSI side of things, like, say, a human bone. (Don’t worry, he called the cops.)

One could argue that the apparent ease with which Jake finds valuables underwater could potentially make treasure-hunting look a lot easier than it probably is in real life.

Jake Koehler’s underwater treasure hunting offers an engaging and innocent glimpse into the adventures of a YouTuber who has mastered the art of rescuing valuables from a watery grave.

Note: YouTube channel reviews are not exhaustive summaries of everything viewers will find, but a representative sample of recent videos to give you a sense of the kinds of things you might expect to see.