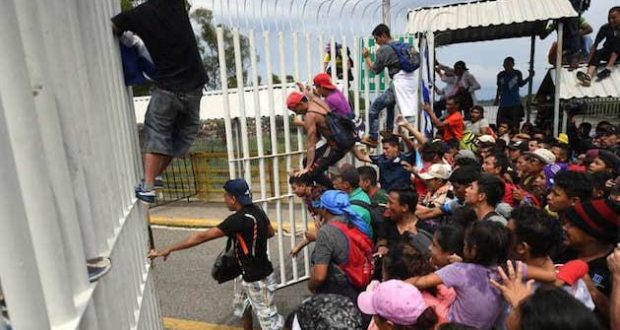 1 in 10 migrants in Caravan have violent criminal records

More than 270 members of the first migrant caravans currently heading north through Central America and Mexico toward the United States have confirmed criminal histories, including known gang membership. The caravan has split into several with the first to arrive numbering about 3,000.

The criminal histories were confirmed by the Department of Homeland Security (DHS).

“Those include a number of violent criminals—examples include aggravated assault with a deadly weapon, armed robbery, sexual assault on a child, and assault on a female,” the department said on Nov. 1.

Sen. Chuck Grassley (R-Iowa) also said on Nov. 1 that he’d obtained information showing that “several members of the first caravan have significant criminal histories, including assault and sexual misconduct against a child, and membership in the MS-13 gang.”

DHS also said that individuals inside the caravans come from countries linked to terrorism, including Somalia, Afghanistan, and Bangladesh. Univision correspondent Francisco Santa Anna reported on Oct. 19, that people from Bangladesh were found inside the caravan and were detained in an immigration facility after attempting to join the migrants who crossed from Guatemala into Mexico.

“Yesterday when we were traveling through Guatemala, we noticed people from El Salvador and even people from Bangladesh,” Santa Anna reported. “Can you imagine what they had to do to get here? They infiltrated themselves in this caravan and tried to cross with the crowd. That would have benefited them greatly.”

Sara Carter, an investigative journalist and Fox News contributor, said on Oct. 22 that she “bumped into a number of young MS-13 gang members” while reporting on the first caravan.

Dozens of migrants have admitted to reporters that they’re trying to get back into the United States after being deported, which is a felony crime. One said he was deported after being convicted of attempted murder. Other migrants have stated that they’re fleeing their home countries due to poverty, which is not accepted as a cause for asylum in the United States. Less than 6 percent of the nearly 11,000 Hondurans who applied for asylum in fiscal year 2016 were accepted.

The confirmation comes several days after Mexico deported two men who were in the caravan, one of whom was wanted for murder.

The fact sheet also noted how Mexican officials have said multiple times that criminal groups have infiltrated the caravan.

In addition, Alfonso Navarrete, Mexican secretary of the interior, said that more than 10 federal police officers were injured by violent migrants at the Mexico-Guatemala border, including two who have traumatic brain injuries inflicted by the migrant men.

Guatemala previously said that police officers on their side were also injured by the group, which hurled Molotov cocktails, glass bottles, and stones at authorities. Two migrants were arrested in Mexico soon after, for trying to shoot the police.

The reason President Donald Trump ordered troops to the border is to protect Americans from such violence, the DHS said.

“The potential for large groups—who have already showed a propensity for using violence to achieve its objective—presents a unique safety threat to our nation and Border Patrol personnel as well as to the security of the American people. We have already witnessed these groups forcibly encroach upon foreign borders and have engaged in violence when confronted by those governments,” the department stated.

“We’ll go up to anywhere between 10,000 and 15,000 military personnel on top of Border Patrol, ICE, and everybody else on the border. Nobody’s coming in,” he said. Trump also stated the caravan has “very tough fighters” and they “fought back hard and viciously against Mexico at” the Guatemala-Mexico border before they broke through.

Previous: Church cleaning up after Halloween trashing
Next: VOTERS GUIDE: McCaskill vs. Hawley and the truth over pre-existing conditions