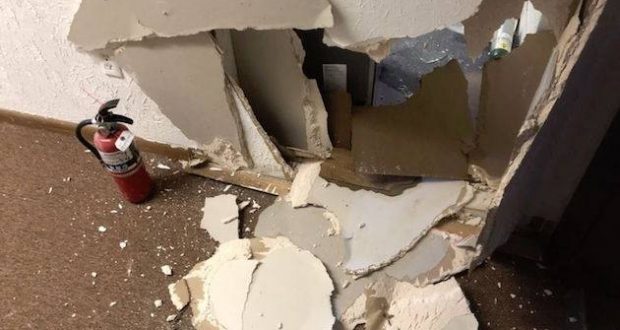 Church cleaning up after Halloween trashing

Whether a Halloween prank or act of hate, the pain of a trashed church is still the same. Glory land Missionary Baptist Church fell victim to the incident which left substantial damage from where vandals struck.

A walk through the church reveals parts of the ceiling are torn down, drums busted in, walls are torn apart and glass shards lay everywhere.

“It’s just unbelievable,” said the church’s treasurer, Linda Hayes. “Who takes out tiles? Who knocks out walls? Who does that?”

Vandals threw a concrete brick through the window to break in and then tore through every single room of the church near Central and Hydraulic. Church officials said they knocked over pews, a refrigerator, ripped keys off the keyboard and even tore the heads off of small figurines.

“Whoever did this, couldn’t have been in their right mind,” said Til Dejong-Hall, a member of the church. “Who goes into a house of worship and vandalizes every single room.”

That house of worship became a crime scene but strangely, nothing was ever taken.

“I feel violated, but I feel pity to the people that would come into a church and do this,” Dejong-Hall said.

Police haven’t named a suspect, because no graffiti was left at the scene it hasn’t been classified as a hate crime. Many inside the church said they fell victim to a Halloween prank, but because they don’t have security cameras inside, they don’t have a visual description.

They do vow that despite the mess, the church’s doors will be open Sunday morning for regular services.

If you have any information, you’re asked to call Wichita police.

Previous: The new KCI airport will cost more to finance
Next: 1 in 10 migrants in Caravan have violent criminal records