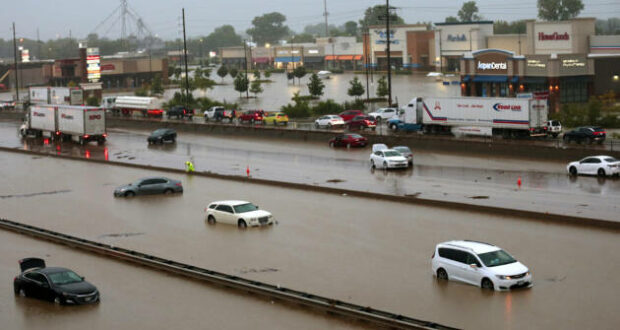 Abandoned cars are scattered by flooding across a shuttered Interstate 70 at Mid Rivers Mall Drive in St. Peters after heavy rain fell through the night and into the morning on Tuesday, July 26, 2022. (Robert Cohen/St. Louis Post-Dispatch via AP)

Large swaths of St. Louis remain under water after historic rainfall fell through Tuesday morning. Emergency officials are concerned that additional rain forecast for Wednesday will cause additional flooding. The rain broke a 100-year record to set a new all-time daily rainfall record for St. Louis. Up to 12 inches of rain have fallen across the metro which has a population of three million.

Roads across St. Louis experienced flooding and ponding. Multiple drivers were rescued from homes and from vehicles on highways and roads, and one person was found dead in a submerged car in St. Louis.

The main flooding concerns for roads were along I-70 in north St. Louis city and county. As of Tuesday afternoon, many areas were still flooded and officials urged caution and asked people to avoid driving in affected areas.

As of noon, rain continued to fall with several additional inches expected through the afternoon on Tuesday. Some of the heaviest rain fell over St. Charles county, where Wentzville, O’Fallon and St. Paul all saw rainfall totals near 12 inches. In St. Louis County, most neighborhoods picked up 5-10 inches of rainfall as of 9 a.m. Tuesday morning.

In addition to the roadways, residents across the area have also reported flooding in their homes. Several emergency shelters have opened up across the region for those who have been displaced.

Temperatures dropped significantly Sunday to Monday. The front that pushed the hot air came back toward St. Louis. That scenario was a setup for areas of thunderstorms that moved across much of the area with torrential rainfall.

In the 2700 block of Hermitage Avenue, where the St. Louis Fire Department said it rescued six people and six dogs via Zodiac boat while about 15 people chose to shelter in place. A family on Odell Street was rescued after they were trapped in their attic due to rising flood water, St. Louis Fire Capt. Garon Mosby said.

St. Louis Fire Chief Dennis Jenkerson said the fire department had responded to about 70 water rescues. At about 10 a.m., firefighters responded to the area of Skinker Boulevard and Rosedale Avenue, where there was more than 8 feet of water pooled in a low-lying area. A resident told them there might be someone inside a vehicle in the area.

As the water started to recede, the vehicle became visible and first responders pulled a person from the vehicle. They were pronounced dead.

The person’s identity has not been released.

Jenkerson urged people not to drive into low-lying waters.