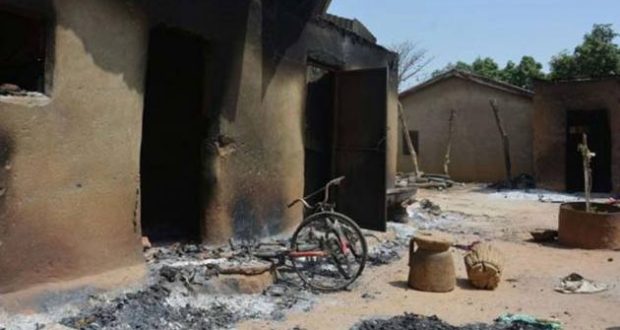 Photo showing houses in the Karamai village in Nigeria that were burned in a Fulani miltia attack. (Image courtesy: Barnabus Fund)

The news regarding Nigerian Christians is getting progressively worse as it is being reported that more than 300 believers were killed in at least seven predominantly Christian villages across Nigeria from mid February to mid March 2019. That’s according to multiple sources that monitor persecution of Christians.

“Since February 10, 2019, there have been at least 270 people killed in Kaduna State alone,” International Christian Concern confirms an that number has only grown since the report. “It has been reported that at least 70 Christians have been killed during a 10-week span at the beginning of 2019 across the other Middle Belt states.”

In one early morning attack on the village of Karamai on Feb. 14, sources said 41 people died after 300 gunmen swarmed the village shouting “Allahu Akbar!” as they fired their weapons and ransacked people’s homes, according to Barnabas Fund. It was reported almost all of those killed were women and children along with a few senior residents who were unable to run away.

Witnesses reported most of the men of the village fled when the attack began.

Another 71 people were killed and 28 injured in an attack on the Dogon Noma village by an Islamic group known as the Fulani militia on March 11. The 2018 Global Terrorism Index compiled by the Institute for Economics & Peace (IEP) lists the Fulani among the top terrorist groups in the world. “In Nigeria in 2018, there has been a dramatic increase in violence involving Fulani extremists,” the report states. Those attacks are clearly not letting up in 2019.

In the recent attack on the Dogon Noma village, the terrorists were “torching houses, shooting and hacking down anything that moved,” according to eyewitnesses. Some estimated that 100 homes were destroyed in the early morning raid.

Another nine people were reportedly killed and 30 houses destroyed in the village of Nandu Gbok on March 16.

Church leaders in Nigeria have repeatedly called on President Buhari, who is a Fulani Muslim, to take action against the Fulani herdsmen who have been repeatedly attacking Christian farming villages.

But a story of tragedy reportedly turned into a supernatural rescue for 72 of those Nigerian Christians who were facing a Boko Haram firing squad.

Four leaders of the Christians were told to renounce their faith in Jesus and revert to Islam. When the men refused, they were executed in front of their families.

Then the wives of the four men were told to renounce their faith or their children would be executed. That’s when something remarkable happened.

The children in the group said the Lord Jesus appeared to them that night and told them “All would be well,” according to sources with the Barnabas Fund. They were told not to fear, that He would protect them, and that they should not renounce Him but stay strong knowing that “He is the way, the truth, and the life.”

The next morning, the terrorists lined the children against a wall and told the four mothers they could save their kids if they would only renounce Jesus Christ and return to Islam. The mothers refused.

As the soldiers prepared to fire, something happened. They dropped their rifles and started to grab at their heads, screaming and shouting “Snakes! Snakes!” Some of the soldiers ran off, and others dropped dead where they stood, according to the Barnabas Fund.

After one soldier had dropped his weapon in fear, one captive attempted to pick up the rifle in order to fire at the fleeing terrorists. He stopped when a four-year-old child told him about angels who were protecting them. “You don’t need to do that. Can you not see the men in white fighting for us?”

The lives of all 72 Christians were spared and they were relocated to a safer region of Nigeria. When the Barnabas Fund’s contact asked the group’s pastor why he thought Jesus appeared to them and not to others, he gave this answer: “He does not need to. You have over 200 versions of Scripture and many people able to explain the Bible to you… These people do not.”

Previous: A study on church leadership: what is “qualified?”
Next: St Joseph floods as Missouri River crests