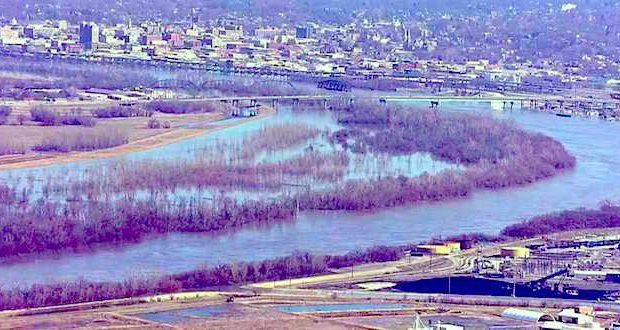 Many homes and businesses were evacuated just hours before as families followed orders and left their homes behind.

KCTV 5 reports that floodwater is surrounding Tim Russell’s home along the Missouri River near southwest Lower Lake Road. Like others in St. Joe, he worries what could happen if nearby flood water overtops levees.

“This is our home. I put a lot of money into this house. A lot of time and a lot of sweat. Blood, sweat and tears,” he said.

Russell moved everything he could as high as it could, but it wasn’t enough.

“We got out a week ago. The damage is terrible,” he said. “We got all of our furniture out. All of our clothing is still in the house .”

Because of the possibility that levees could break at any time, police went door to door in neighborhoods behind the levee system in St. Joe.

Some residents, like Ray Younger, plan to stay put, for now.

“If the water comes up, then I’ll go,” he explained.

Other families with small children, like Matthew Shaw’s, loaded up and left. Shaw stayed behind to keep an eye on his family’s home. He’ll leave too at the first sign of a breach.

National Weather Service officials say that the flooding will only worsen with rain expected over the weekend across northeastern Missouri.

“This morning when they called it mandatory, we packed up everything we could and got the kids out, got our animals out,” he said. “As long as my family, animals and kids are safe that’s the main thing.”

Many in St. Joe are worried that flooding will remain a concern for weeks to come as more snow melts to the north.

As for Russell and his family, they are now living in an RV on higher ground. He is frustrated that more hasn’t been done to improve flood control along the Missouri River, a spot he plans to continue to call home.

“We clean it up and we move right back in,” he explained. “We are river people.”

The flood stage is expected to continue to move south towards Kansas City in the next week.