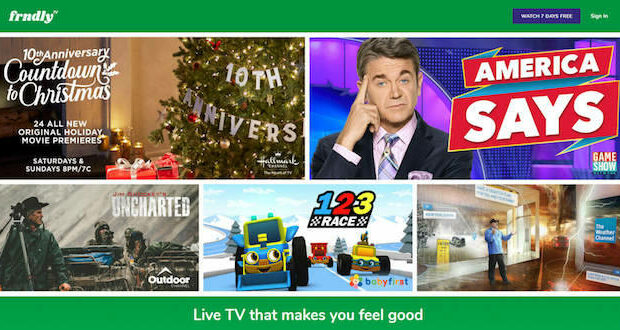 Can a new streaming service called “Frndly” make a difference?

For decades, satellite and cable companies maintained a large customer base by offering channels that families couldn’t get anywhere else.

Then came the streaming era, which gave families more alternatives and more content at a significantly cheaper rate. But then those same services began promoting objectionable content — and countless families fled.

Don’t fret, though, because there are plenty of family-friendly alternatives. This month, we look at one of the best ones: Frndly TV.

It bills itself as “the most affordable Live TV streaming service,” a tagline that holds true with the basic, non-HD plan starting at $6.99 and the HD plans — which include DVR service — starting at $8.99.

All plans come with more than 35 channels — and most of them are family-friendly.

Of course, at that price and that lineup, there must be a catch, right? Well, sort of: There are no sports or news channels — which means you can’t watch Sunday Night Baseball, Monday Night Football or the latest political nonsense. Then again, your blood pressure might benefit from skipping some of that.

My family gave Frndly TV a try in recent weeks and has been watching it every day.

For fans of family-friendly movies, there’s Hallmark and Hallmark’s competitors, GAC Family and UPTV. (The latter two, if you’re curious, produce content every bit as good as Hallmark.) For fans of classic television, you have those three channels plus Me TV, the Dove Channel and Hallmark Drama. (Shows such as Andy Griffith are prevalent on Frndly’s channels.)

For lovers of mysteries, there’s Hallmark Movies and Mysteries.

If you enjoy history, you can try History or Military History. If weather documentaries are your things, then give the Weather Channel a try.

There are channels for outdoorsmen (Outdoors Channel and Sportsman Channel), game show fans (Game Show) and lovers of westerns (INSP).

Frndly was launched in 2019 by a former Dish Network executive who wanted to offer a limited bundle directed at families.

Mind you, some titles on Frndly aren’t always family-friendly (A&E and Lifetime, which are part of the lineup, include some of the worst offenders).

But with multiple kid-friendly channels, a cloud-based DVR with unlimited storage, and an impressive price tag, Frndly TV is one of the best options for today’s families. Visit FrndlyTV.com

Prehistoric Planet (Apple TV) — What if a nature documentary had been recorded during the age of the dinosaurs — and Sir David Attenborough was around to narrate it? That’s the idea behind Apple TV Plus’ new five-part series Prehistoric Planet, which was made by the BBC Studios Natural History Unit and voiced by Attenborough. It’s just like Planet Earth — only with dinosaurs.

The Story Behind The Story (TBN) — Mike Rowe of Dirty Jobs fame examines unique moments from world history while searching for the spiritual lessons we can learn from them. In Episode 1, for example, Rowe tells the story of Hedy Lamarr, an Austrian-born American actress who helped win World War II thanks to her knowledge of radio frequencies. It’s a new series that’s well-done and inspiring.

The Repair Shop, Season 5 (Discovery Plus) — Furniture restorer Jay Blades and a crew of experts use their talents to repair nearly everything under the sun — a wind-up panda bear toy, an old ship’s wheel, an antique clock and an antique stool, among them. It’s as entertaining as it is educational.

Benjamin Franklin (PBS) — This four-hour, two-part documentary examines the life of one of the most significant figures in the founding of the United States. Ken Burns, the same filmmaker behind Civil War and countless other landmark projects, directed it. It is available on all PBS streaming platforms, including PBS.org.

Previous: Here’s who created the baby formula crisis
Next: Visit to Israel had profound impact on quarterback Tom Brady