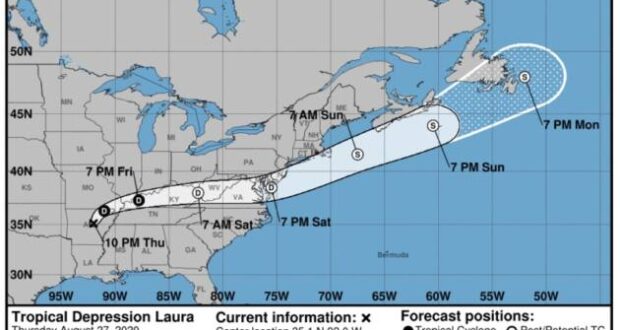 More than 600,000 people remain without power Saturday morning as now tropical depression Laura moves into West Virginia. Three days after Laura made landfall as a Category 4 hurricane in Louisiana, residents are picking up the pieces of destroyed homes, businesses and churches.

The damage continues as the storm creates a line of tornadoes stretching across the mid-section of the easter half of the nation.

Lake Charles, Louisiana, was hit particularly hard by the storm. A fire began at a chemical plant near the city and officials point to Hurricane Laura as the cause of the blaze. Residents of the cities of Westlake, Moss Bluff, and Sulphur have been ordered to shelter in place, keep windows and doors closed, and refrain from using air conditioning.

“Storm debris spread across the entire town,” a report from USA Today explained. “Walls were blown off homes and businesses, revealing urinals and beer signs inside. Trailers were flipped and roofs of homes were crushed.”

Six people across the state lost their lives due to Laura and Louisiana Gov. John Bel Edwards predicts that “there could be more fatalities,” according to New Orleans’ CBS affiliate WWL.

While the damage from the hurricane was severe, it could have been much worse, particularly for Texas, the second most populous U.S. state. 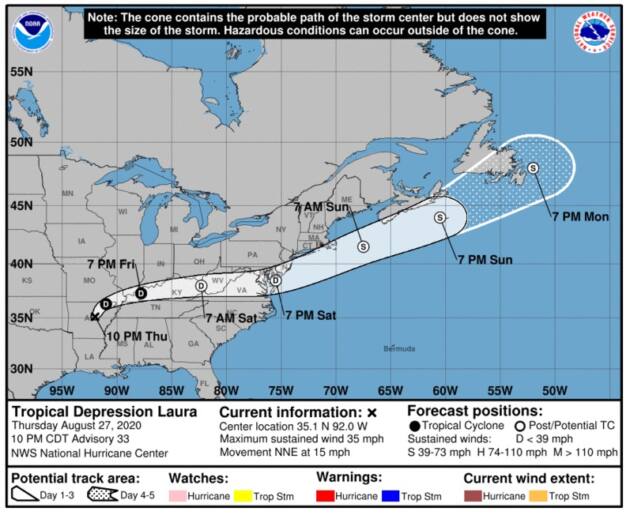 “We dodged a bullet,” Texas Gov. Greg Abbott proclaimed as he toured affected parts of his state Thursday. “We were anticipating and it was prognosticated that there would be a storm surge that could very easily exceed 10 feet. I was told earlier that the storm surge was three feet, and that seven-foot differential means all the difference.”

Still, Hurricane Laura caused power outages and tornadoes across multiple southern states. As of Friday afternoon, more than 600,000 residents of Texas, Louisiana, and Arkansas remain without power, according to PowerOutage.US, an “on going project created to track, record, and aggregate power outages across the United States.”

Texas had more than 100,000 power outages as of Friday afternoon; with nearly all of the power outages concentrated along the state’s eastern border with Louisiana. In Arkansas, approximately 30,000 residents do not have electricity. The amount of power outages fluctuated back and forth throughout the afternoon.

President Donald Trump is expected to visit Louisiana and Texas at some point this weekend to survey the damage caused by Hurricane Laura. The president has been praised by officials on the ground for the federal assistance in preparing for the storm and the quick response as it hit.

As residents of Louisiana continue to deal with the impact of Hurricane Laura, the charitable organization Samaritan’s Purse is working to help those in need. The organization has deployed disaster relief to hard-hit areas.

“Louisiana families are struggling after Hurricane Laura,” said Franklin Graham, president of Samaritan’s Purse. “Please continue to pray for everyone in the storm’s path and our teams as they prepare to provide critical relief to people who are hurting.”

Even as the worst of Laura has come and gone, other parts of the United States will feel the impact from the remnants of the storm over the next couple of days. According to the National Hurricane Center, a division of the U.S. National Oceanic and Atmospheric Administration, Laura will pass through the states of Missouri, Illinois, Indiana, and Kentucky as a tropical depression, with sustained winds of less than 39 miles per hour.

The projected path of Tropical Depression Laura shows the storm hovering around the border of Kentucky and West Virginia early Saturday morning as a post-tropical cyclone. By Saturday evening, the storm will have passed through Virginia and will be concentrated over the Delmarva peninsula.

From there, the storm will move out to sea. By Sunday morning, the remnants of Laura will be located south of the coast of Maine.

The National Weather Service has issued flash flood watches for “portions of northeast Arkansas, southeast Missouri, western Kentucky and Tennessee, northern of Mississippi, and northwest Alabama.” The NWS predicts rainfall of one to three inches in the “central and southern Appalachians” and the mid-Atlantic states.

There are already two new storms on the horizon developing in the Atlantic Ocean. Both storms have a 30% chance of development, according to USA Today.