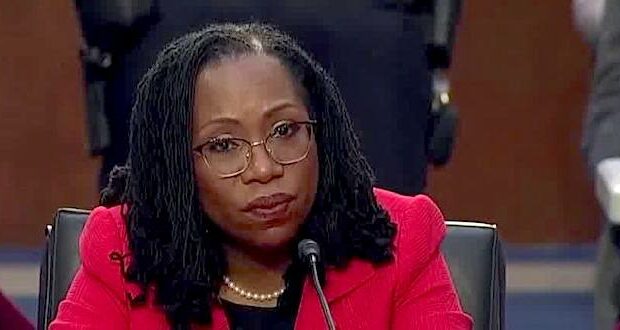 The 51-year-old judge clerked for Justice Stephen G. Breyer — whose seat she fills at the Supreme Court — in 1999 and 2000. Biden elevated Jackson to the U.S. Court of Appeals for the D.C. Circuit, one of the most powerful courts in the country, in 2021. But Jackson first became a federal judge in 2013, serving the U.S. District Court for the District of Columbia as a President Barack Obama appointee.

Born in Washington, D.C., Jackson grew up in Miami. She attended Miami Palmetto Senior High, where she made waves on the speech and debate team. Even then, she hoped to one day become a judicial appointee, as she revealed in her senior yearbook.

Today, Jackson lives in Washington, D.C., with her husband, Patrick Jackson, a general surgeon at MedStar Georgetown University Hospital. The two married in 1996 after meeting at Harvard and have two daughters together: Talia, 21, and Leila, 17.

At the start of her legal career, while working for a Boston law firm, Jackson remembered the struggle between working in law and raising a family.

“Like so many women who enter Big Law, I soon found it extremely challenging,” she said in 2017, while speaking at the University of Georgia. “You start to feel as though the demands of the billable hour are constantly in conflict with the needs of your children.”

“Our politics may differ, but my praise for Ketanji’s intellect, for her character, for her integrity, it is unequivocal,” Mr. Ryan told the Senate Judiciary Committee of Jackson in 2012.

Jackson cites her father, who later became the chief attorney for the Miami-Dade County School Board, as her role model. One of her earlier memories is sitting next to him as a preschooler with her coloring books while he studied for law school.

Jackson’s mother worked as a high school principal. Her younger brother worked for the Baltimore police and served in the U.S. Army, including in Iraq, before becoming a lawyer. Two of her uncles also worked in law enforcement.

If confirmed, Jackson would be the first Black woman to sit on the bench of the nation’s highest court but not the first minority woman. Biden first announced that he would nominate a Black woman to the Supreme Court on the campaign trail.

“I will nominate someone with extraordinary qualifications, charity, experience and integrity,” Biden repeated in January. “And that person will be the first Black woman ever nominated to the United States Supreme Court.”

While Jackson has served in her current position for less than a year, her earlier rulings as a district judge “comported with those of a liberal-leaning judge,” the New York Times reported.

Those include “blocking the Trump administration’s attempts to fast-track deportations, cut short grants for teen pregnancy prevention and shield a former White House counsel from testifying before Congress about President Donald J. Trump’s efforts to obstruct the Russia investigation.”

In Committee on the Judiciary v. McGahn in 2019, Jackson ruled that former White House counsel Donald F. McGahn II must comply with a congressional subpoena for his testimony about President Trump’s behavior during the Russia investigation.

During her time on the D.C. Circuit, Jackson has encountered at least one high-profile case — one that involved former president Donald Trump and the Jan. 6 riots at the U.S. Capitol.

In December, Jackson joined a unanimous ruling that Trump could not prevent the House investigation from certain records from the Trump White House, Vox reported. The Supreme Court later upheld that decision.

At her nomination ceremony, Jackson began her speech by “thanking God for delivering me to this point in my professional journey,” and adding that “one can only come this far by faith.”

While the details of her faith are unclear, she served on the inaugural advisory board for a Christian school in Rockville, Maryland, from 2010-2011. The school backed Christian beliefs on marriage, gender, and the “sanctity of all human life from conception to natural death.”

During her confirmation hearings last year, she commented on her time at Montrose Christian School, which she described as a now-defunct K-12 private school.

“I was aware that Montrose Christian School was affiliated with Montrose Baptist Church,” she said. “I was not aware that the school had a public website or that any statement of beliefs was posted on the school’s website at the time of my service.”

When asked by Republican Senator Josh Hawley of Missouri about the First Amendment, Jackson responded, “I do believe in religious liberty,” calling it a “foundational tenet of our entire government.”

In response to the Supreme Court nomination, Charles Holmes Jr., an HBCU (Historic Black College and University) college director for The Summit Church, claimed a personal connection to Jackson on Twitter.

6. What Biden says about Jackson

In a tweet announcing the nomination, Biden called Jackson “one of our nation’s brightest legal minds” and said that she will be “an exceptional Justice.”

During his formal announcement on Friday, Biden introduced Jackson as “a daughter of former public school teachers, a proven consensus builder, an accomplished lawyer, a distinguished jurist on one of the nation’s most prestigious courts.”

“Today, I’m pleased to nominate Judge Jackson who will bring extraordinary qualifications, deep experience in intellect, and a rigorous traditional record to the court,” he said.

7. What pro-life leaders say about Jackson

“Joe Biden is fulfilling his promise to only appoint justices who support the Roe v. Wade regime of abortion on demand up to birth,” president Marjorie Dannenfelser said in a press release. “Ketanji Brown Jackson is backed by many of America’s most radical pro-abortion groups. She is on record opposing the free speech rights of pro-life advocates pleading to save lives outside abortion centers and supporting the false claim that abortion is ‘health care.’”

Dannenfelser added, “We have no doubt she will work with the most pro-abortion administration in history to enshrine abortion on demand nationwide in the law.”

SBA List also noted that in 2001, Jackson co-authored an amicus brief in McGuire v. Reilly in support of a Massachusetts law that created a “buffer zone” preventing pro-life sidewalk counselors from approaching women outside of abortion clinics. Jackson’s clients include pro-choice groups such as NARAL and the Abortion Access Project of Massachusetts.

The March for Life also cautioned pro-lifers on Twitter about Brown’s record.

“March for Life opposes President Biden’s anticipated nomination of Judge Ketanji Brown Jackson for the U.S. Supreme Court based on her record of judicial activism,” the pro-life group said. “We expect her to be a reliable vote for the far left and the Biden administration’s radical abortion agenda.”

“We urge the Members of the Senate to stand for our nation’s mothers and most vulnerable unborn by rejecting this extreme nominee, and we encourage the nomination of a judge who will honor our Constitution and the right to life,” the group concluded.

As the head of Americans United for Life, Catherine Glenn Foster highlighted that abortion groups such as NARAL and Planned Parenthood applauded Jackson as the nominee “tragically, and literally within seconds of President Biden’s announcement.”

“Although Kentanji Brown Jackson has not yet explicitly stated her views on Roe or abortion, NARAL, Planned Parenthood, and other abortion activists see in her an ally for the moral crime of abortion,” she stressed in a statement.

When asked about her position on Roe v. Wade during her confirmation proceedings last year, Jackson responded: “As a sitting federal judge, all of the Supreme Court’s pronouncements are binding on me, and under the Code of Conduct for United States Judges, I have a duty to refrain from critiquing the law that governs my decisions, because doing so creates the impression that the judge would have difficulty applying binding law to their own rulings.”

“Ketanji Brown Jackson is the most radical judge ever nominated for a seat on the Supreme Court. A review of her record and judicial philosophy reveals a deeply troubling pattern and raises questions about her ability to be a fair and impartial judge.

“Her limited judicial record reveals that Jackson has consistently ignored the Constitution, twisting the law to favor certain outcomes. Judges should play a limited role in our government, yet Jackson’s far-left supporters want her to impose a political agenda that invents new rights or erases rights she doesn’t like.

“Based on the information we already know, senators should reject her for this lifetime appointment.”