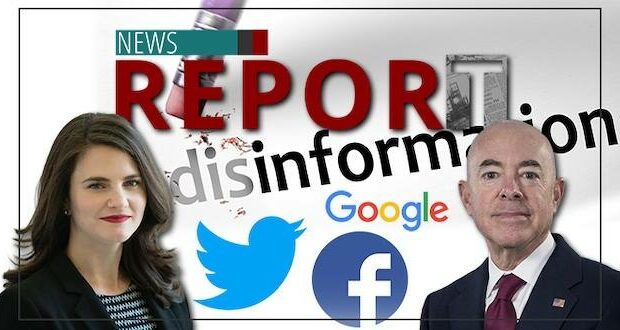 Nina Jankowicz, who stepped down from the board, and Homeland Security Secretary Alejandro Mayorkas.

After widespread criticism, the Department of Homeland Security has officially disbanded its Disinformation Governance Board. The move comes just months after it was formed amid suspicions it would be a tool for government censorship of dissenting voices.

In the announcement, Homeland Security Secretary Alejandro Mayorkas said the agency “has terminated the Disinformation Governance Board and rescinded its charter effective today, August 24, 2022.”

The DHS said that it “welcomes” recommendations from the Homeland Security Advisory Council (HSAC) subcommittee, which earlier in the day issued recommendations to Mayorkas, including the determination that there is “no need for a separate Disinformation Governance Board.”

But DHS doubled down on its new mission of combating what it, or the White House, has determined is misinformation. Critics point out that its wording is similar to a proclamation made by the Russian government at the start of its invasion of Ukraine. Opinions that defy the official Russian narrative of the war are now punishable by imprisonment.

“But it is our assessment that the underlying work of Department components on this issue is critical,” the HSAC report reads. “The Department must be able to address the disinformation threat streams that can undermine the security of our homeland.”

In April Mayorkas said that the new board would focus on stopping the spread of “misinformation” and acknowledged that the HSAC “has concluded that countering disinformation that threatens the homeland, and providing the public with accurate information in response, is critical to fulfilling the Department’s missions.”

Shortly after the announcement, Sen. Josh Hawley (R-Mo.) was one of the hundreds of eleted officials and Constitutional scholars who raised concerns that the board may be used to police speech. “This new board is almost certainly unconstitutional,” he said in a letter on April 28, adding, “It can only be assumed that the sole purpose of this new Disinformation Governance Board will be to marshal the power of the federal government to censor conservative and dissenting speech.” He also accused the Biden administration of treating “competing policy views” as disinformation that has to be investigated and monitored.

One problem with the board was that the White House tapped an individual who, herself, had spread disinformation.

Nina Jankowicz, tapped by the White House to head the board, served as a disinformation fellow at the Woodrow Wilson Center for International Scholars in Washington. It was revealed she promoted false information about the Hunter Biden laptop scandal; users found posts she had made on Twitter that claimed the Hunter Biden laptop was part of a Russian disinformation campaign. Multiple media outlets including The Washington Post and The New York Times later published articles verifying and acknowledging the authenticity of Hunter Biden’s laptop. Jankowicz later defended her previous posts, writing on Twitter: “For those who believe this tweet is a key to all my views, it is simply a direct quote from both candidates during the final presidential debate. If you look at my timeline, you will see I was livetweeting that evening.”

She was also found to have made posts praising the now-discredited “Steele dossier,” which was used to smear former President Donald Trump by alleging that that the Trump campaign had ties with Russia. Jankowicz has publicly issued other comments against Trump several times, including a claim that Trump’s presidency would embolden ISIS.

She has also called people who opposed speech codes on social media as “First Amendment zealots.”

A spokesperson for DHS told The Washington Post that Jankowicz was allegedly “subjected to unjustified and vile personal attacks and physical threats,” without elaborating.

“Neither Nina Jankowicz nor the board have anything to do with censorship or with removing content from anywhere,” he claimed. “Their role is to ensure that national security officials are updated on how misinformation is affecting the threat environment. She has strong credentials and a history of calling out misinformation from both the left and the right,” he told the outlet.

But criticism of the disinformation board has not only come from Republicans or those on the right, but also civil liberties and human rights groups, Jameel Jaffer, director of the Knight First Amendment Institute at Columbia University, noted in a May 18 Twitter post.

“There were very good reasons to question and criticize the Biden admin’s initiative,” he said.