Families of police officers applauded this week as the National Association of Police Organizations (NAPO) endorsed President Donald Trump for reelection. It had supported the Obama/Biden ticket in 2008 and 2012. The organization represent more than 1,000 police unions and associations and 241,000 law enforcement officers.

The news shocked Democrats and the Biden campaign but was no surprise to many police officers as large Democrat-controlled urban areas move to defund public safety departments. Of the twenty largest most violent cities in the nation, only one is Republican led.

Violence linked to Democrat cities made headlines after President Donald Trump pointed out that the most violent cities were controlled by Democrats. The Washington Post was criticized for saying that claim was false in a headline that read “Trump keeps claiming that the most dangerous cities in America are all run by Democrats. They aren’t.” The Post story, however, then went on to publish a graph (below) that actually showed Trump’s assertion to be true. The paper was criticized by anti-violence groups and media watchdog organizations for its “biased” reporting of Trump’s statement. 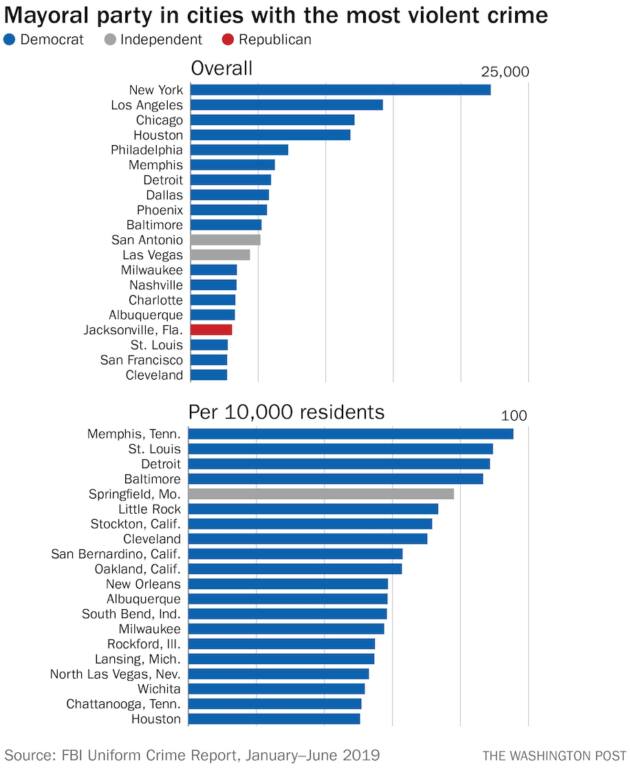 The narratives painted by the nation’s leading news organizations is not lost on the men and women in blue. The endorsement of Trump was, say many, the strongest endorsement they have ever made and mirrors public opinion that agrees with Trump’s calling out Democrat mayors for rising violence in their cities.

“Our endorsement recognizes your steadfast and very public support for our men and women on the front lines, especially during this time of unfair and inaccurate opprobrium being directed at our members by so many,” NAPO President Michael McHale wrote in a letter to Trump.

His listed several areas of agreement between the organization and Trump, including:

“NAPO is pleased to support your re-election campaign for president, and we are confident of your continued strong support of America’s law enforcement community,” the letter said.

The organization endorsed Barack Obama for president in 2008 and 2012 with Joe Biden on the ticket as vice president. Biden is the presumptive Democratic nominee. Police unions did not make an endorsement in 2016.

NAPO, the letter said, is “a coalition of police unions and associations from across the United States that serves to advance the interests of America’s law enforcement through legislative and legal advocacy, political action and education.” Its members “share a common dedication to fair and effective crime control and law enforcement.”