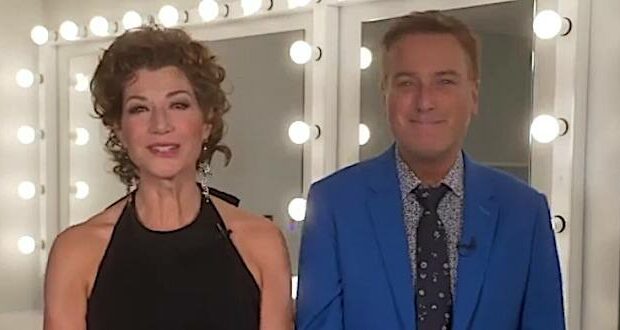 In late July, Grant accidentally fell while cycling in Nashville. Although she was wearing a helmet, she suffered several cuts and bruises. During a residency at the Ryman Auditorium, husband Vince Gill revealed that Grant was “knocked unconscious for 10 or 15 minutes” and was transported to Vanderbilt University Medical Center for treatment.

The 62-year-old peformer was required to stay overnight at the hospital for additional observation. She was also forced to cancel and reschedule a handful of shows to focus on her recovery journey and health. While adjusting her calendar, Grant had the holiday season on her mind and solidified her plans to make her Christmas run happen.

“On the advice of my doctors and friends who have been through similar experiences of recovery, I am choosing to give myself the gift of a very simple fall season,” she previously wrote on Instagram. “I look forward to making music with Michael W. and Vince during the Christmas season.”

Following her comeback appearance, Grant turned to social media to express her gratitude for the overwhelming support and to reflect on her experience.

“Thank you, Memphis!,” she wrote. “After a season of healing at home, it was good to be back on stage with Michael W. Smith, Michael Tait and my musical family. Many thanks to @compassion, @parentingtodaysteens for your partnership on the road and for the important work you do in the U.S. and around the world. And thank you to @balsamhill for providing exquisite trees and décor to make our stage look so beautiful.”

She continued to acknowledge her devoted listeners who stayed by her side and sent well wishes in her direction during the difficult time. “Finally, Thank YOU for your many prayers over the last few months and as my healing continues. I hope to see some of your familiar faces in the audience over the next few weeks. XO,” Grant wrote.

Following the Christmas tour, Grant will return to Nashville for a 12-date-only residency with husband Vince Gill at the Ryman Auditorium.