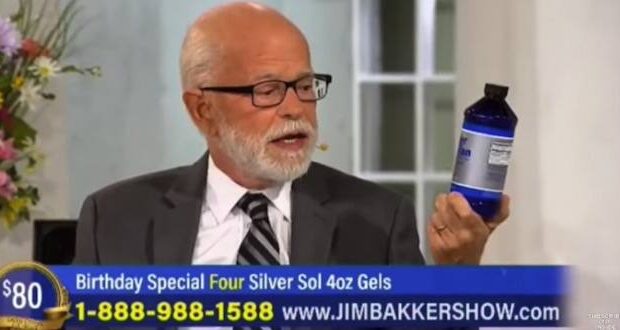 Former television evangelist Jim Bakker continues to live in the Missouri Ozarks and preparing for the end times. He is promoting survivalist gear and books about the apocalypse on his website almost 20 years after he was released from prison on a conviction of bilking followers out of millions of dollars.

Back from the evangelical wilderness, Bakker tapes a daily TV show using his website to pitch what he calls “love gifts,” a variety of products including “Tiffany-style” jewelry, fuel-less generators and buckets of dried food. For $500, customer can get “Jim’s All American 4 Star Vegetable” buckets. Two thousand dollars will get the “Jerry Jones Special,” which promises “over 3,300 servings of food and enough fuel to cook 480 meals.”

Preparing for the end of the world is nothing new for Bakker, who served almost five years in prison following his conviction for the $158 million rip-off of his followers. “Pastor Jim,” as he calls himself now, published a book in 1998 called “Prosperity and the Coming Apocalypse”, which he sells on his site for $20 and proclaims: “This is not just a book of prophecy, it is a book of survival.”

His longtime wife Tammy Faye having divorced him while he was in prison, Bakker married his new wife, Lori, the same year he published the book. She now works beside him as a pastor on the Jim Bakker Show and offers her own line of products such as the “Lori’s Little Lambs Chrystal Necklace” for $35. Most of the goods, the Bakkers assure their followers, are at least partially tax deductible.

Bakker’s long-abandoned amusement park called Heritage USA is something of a “post-apocalyptic ghost town” these days.