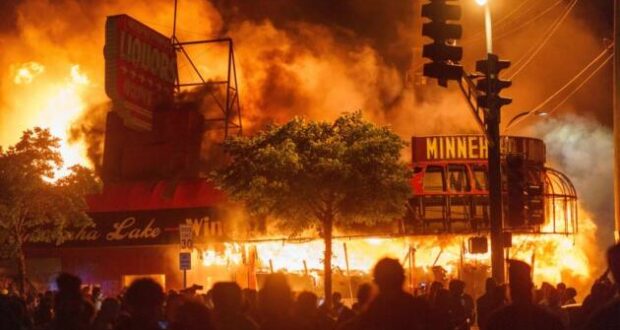 Another business exits Minneapolis after riots and looting

More businesses are leaving cities after mayors failed to protect them from looting. The latest is a Minnesota business owner, whose company was burned to the ground during last week’s violent riots in Minneapolis, who announced he is planning to exit the city, leaving behind many jobs.

Kris Wyrobek, a NASA scientist and the president of the manufacturing company, 7-SIGMA Inc., said about 50 jobs will be lost in Minneapolis after the company’s relocation, the Star Tribune reported. No details have been provided about where the company will move to.

“They don’t care about my business,” Wyrobek told the outlet. “They didn’t protect our people. We were all on our own.”

“The fire engine was just sitting there,” Wyrobek said, “but they wouldn’t do anything.”

Around 570 buildings were damaged or set ablaze in the city where George Floyd died in police custody on Memorial Day, according to the city of Minneapolis, although the tally of property destruction is likely to rise.

Minneapolis Mayor Jacob Frey is expected to ask for state and federal aid to help repair the city after the wave of civil unrest, which has abated in recent days as the National Guard was brought in to support local law enforcement.

“We definitely need all the help we can get from the state,” Saint Paul Mayor Melvin Carter told Fox9 in an interview during a tour around the hardest-hit areas of Minneapolis.

Officials in Minneapolis said property damage due to looting and vandalism that followed protests over the death of Floyd has caused at least $55 million in destruction.

READ: Pro-life counselors arrested in NYC for not wearing masks

Frey said he was unaware of 7-SIGMA’s decision to relocate its business, and the Minneapolis mayor and city leaders are currently working to convince business owners to rebuild in the city, because many of them have been critical of the city’s response to the protests.

Following last week’s protests Wyrobek was asked if he ever thought he would move out of Minneapolis. “Not in my wildest nightmare,” he said. He added that the company is optimistic about rebuilding, but he told the Tribune that they are “certainly not able to do that in Minneapolis.”

7-SIGMA was founded in 1973 and manufactures high-performance polymer and metal components for the printing, medical, aerospace, and industrial markets, according to the company’s website.

Previous: Faith comes before politics for White House press secretary Kayleigh McEnany
Next: FROM THE CHEAP SEATS – Live sports in 2020?