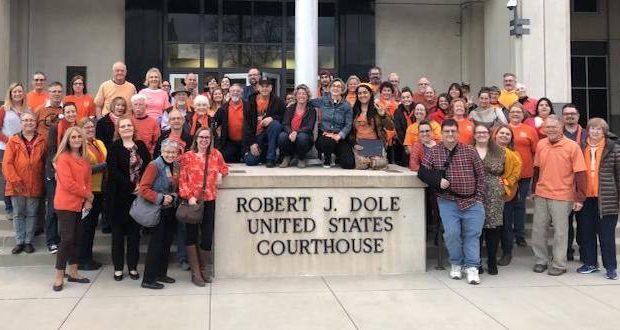 As a blizzard battered Lenexa, Kansas, on December 14, clean sheets in shades of purple, white, and light blue stretched appealingly over rows of cots at a local church, ready for those without shelter.

Volunteers and staff put up the cots after the church and the city of Lenexa settled a federal court case on December 13. The settlement authorized the homeless shelter two months after Shawnee Mission UU Church (SMUUCh) first asked for the city’s okay to partner with Project 1020, a local nonprofit dedicated to housing and feeding those experiencing homelesness.

“We have plants up, nightlights, a room for activities, room for food,” said the Rev. Rose Schwab, senior minister at the church. “It’s a beautiful, beautiful thing to see the space filled with something so needed and so important.”

SMUUCh first considered housing homeless people in October, when a member connected to Project 1020 suggested a partnership. The organization runs a cold-weather shelter December through April.

READ: Church resources available to highlight plight of believers around the world

Complications securing shelter space in nearby Olathe left the organization in search of a location for the 2019–2020 winter season. Eight miles away, SMUUCh is rich with square footage. The converted elementary school has “many unused classrooms,” according to Schwab. When the church’s board of trustees approved the idea in October, SMUUCh went to the city of Lenexa for approval.

The city initially agreed to allow collaboration. “The city said that it was not in violation of any city codes and that it was an accessory use of the church. That was our first meeting, and then we left. And then we got a letter that said ‘no,’” Schwab said. (An “accessory use” is one necessary for a church to carry out its mission and purpose.)

When the letter arrived ten days later, SMUUCh and city representatives met again. “They just continually reasserted that this was not permitted,” Schwab says. The city changed courses, saying that housing the homeless was not, in fact, an accessory use. They also cited zoning issues: although commercial-use buildings nearly surround the church’s property, it is zoned residential.

“We were left with questions of how could we turn people away,” Schwab said, questions which kicked off a congregation-wide discussion among SMUUCh’s 320 members and its network of friends. Poverty in Kansas “runs deep,” Schwab said, but Johnson County, home to Lenexa, is “a very seemly, affluent place; therefore, the poverty is very hidden.” According to the United Community Services of Johnson County, homelessness there increased 30 percent between 2017 and 2018.

Dalton specializes in the Religious Land Use and Institutionalized Persons Act (RLUIPA). Among other things, the law protects religious institutions from discrimination in zoning. Dalton argued in a December 5 hearing that the church’s “religious mission was being inhibited by the city’s decision to not allow us to have this overnight stay for homeless [people],” Dalton said. “That violated the substantial burden provision of RLUIPA, by not allowing them to engage in their religious beliefs, and also the equal terms part of RLUIPA, by not allowing them to have this use but by allowing others to have similar uses.”

Between 100 and 150 supporters, all wearing orange, turned out for the hearing. The judge had to find a bigger courtroom to accommodate the crowd.

At the hearing’s conclusion, the city of Lenexa asked about a possible settlement. The following Friday, December 13, the city and the church signed an agreement requiring the city to pay a portion of the church’s legal costs and allowing SMUUCh to host the Project 1020 shelter this winter and the next two winters.

In the meantime, the agreement stipulates that the church and the city craft an ordinance permitting homeless ministries in Lenexa. Schwab will work with the broader Lenexa faith community to do so. “I really am excited to get to know the people in the community who are people of faith and get to work together on an act of justice,” she said.

The settlement paves the way for three years of Project 1020’s homeless shelter and for an official response to homelessness in Lenexa. The latter will almost certainly open a discussion about poverty and homelessness—something already underway at SMUUCh, thanks to the city’s refusal. “I’ve been finding housing for people in my congregation, and I know how many people in my congregation ask me for groceries,” requests she holds in confidence, Schwab said. “Within our own little community, that sense of hiddenness has [now] lifted. Many, many people came forward and said, ‘I have been homeless.’”

Dalton was pleasantly surprised by how quickly the case wrapped up. While not every case proceeds this swiftly, he encourages religious organizations to stand up for their values. When denied, “most communities will simply agree with the local government,” he said, but “it’s okay to challenge the government.”

For her part, Schwab urges fellow Unitarian Universalists and congregations interested in similar work to contact the church.

She sees power and potential in connecting: “It is time for us to come together as a denomination around ministry to people who are experiencing oppression due to poverty,” she said. “We can make a big difference. We really can.”

Previous: A response to Christianity Today and their call to remove Trump from office
Next: FISA Court rips FBI over lies that led to investigation, spying on Trump