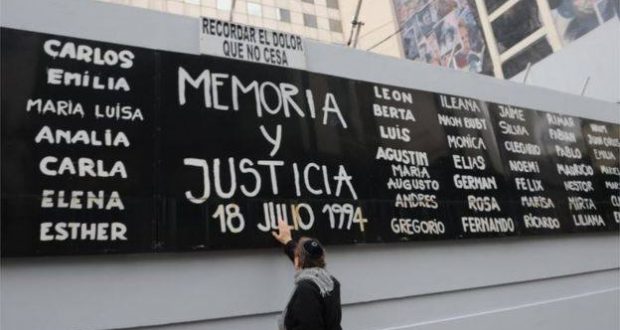 Argentines are remembering the over 80 people killed in a terrorist bombing. Photo: Facebook.

It accuses the Shia Islamist group, which is currently involved in a skirmish with Israel on the southern Lebanese border, of being behind two attacks on Argentinian soil.

The announcement was made on the 25th anniversary of one – the bombing of the Amia Jewish cultural centre in Buenos Aires, in which 85 people died. Hezbollah, next to ISIS, is the world’s most prolific terrorist organization having killed thousands over the years.

Hezbollah is also designated by the United States, Canada, the United  Kingdom, Israel and several major Gulf Arab states, but Argentina is the first country in Latin America to do so.

“At present, Hezbollah continues to represent a current threat to security and the integrity of the economic and financial order of the Argentine Republic,” Argentina’s Financial Information Unit said on Thursday in a statement announcing the freezing of the group’s assets.

Argentine officials say Hezbollah is engaged in illegal activities between Argentina, Brazil and Paraguay to finance its operations elsewhere.

The group has been accused of carrying out a string of bombings and plots against Jewish and Israeli targets around the world since it emerged in Lebanon with the help of Iran during the early 1980s.

The attack on the Amia centre – which Argentina said was planned and financed by Iran, and carried out by Hezbollah – was the South American country’s deadliest terrorist attack.

Both Iran and Hezbollah have denied any involvement. No-one has ever been brought to trial in connection with the bombing.

Argentines gathered in front of the rebuilt Amia centre on Thursday to remember those who died when a truck laden with explosives ploughed into the building.

Ambulances, police cars and fire stations rang their sirens at 09:53 – the time that the explosion happened 25 years ago.

US Secretary of State Mike Pompeo travelled to Buenos Aires to attend the commemorative event as well as a counter-terrorism summit also held in the capital.

The US, along with Israel, had pushed for Argentina to declare Hezbollah a terrorist organisation.