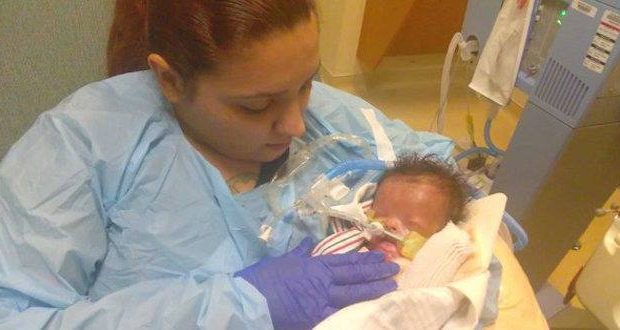 Baby born without skin struggles for life in Texas

A Texas couple is desperate for answers as doctors struggle to put together a care plan for a baby boy who has spent the first three months of his life in hospitals after he was born without skin.

Priscilla Maldonado Gray and Marvin Gray welcomed their third child into the world on Jan. 1, the San Antonio Express-News reported.

“My whole time being pregnant everything was going good,” Maldonado wrote on a GoFundMe campaign page, “then an ultrasound showed that he wasn’t gaining weight so they decided to induce me at 37 weeks.”

The baby’s heart rate was dropping and doctors decided to perform an emergency C-section.

Ja’bari Gray was born missing most of his skin, aside from on his legs and head.

The baby’s mother also revealed on the campaign page that her son’s chin was fused to his chest and his eyes were fused shut.

“The skin disorder he has is so very rare that no doctor has ever seen it before,” Maldonado wrote.

Doctors initially diagnosed Ja’bari with a rare skin condition called Aplasia Cutis. According to the Genetic and Rare Diseases Information Center, Aplasia Cutis is a congenital condition in which a person is born without skin. 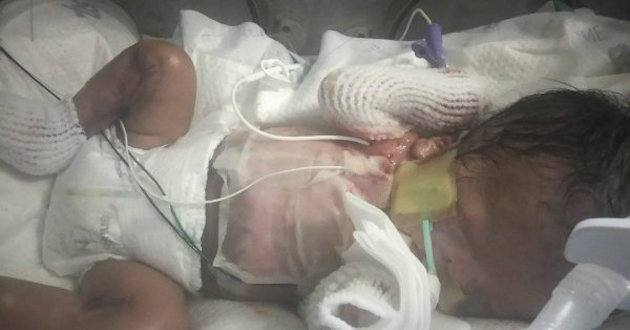 But after the baby was transferred last Friday to Texas Children’s Hospital in Houston, specialists there think he may be suffering from a different condition.

“They’re just really focused on keeping him comfortable right now,” the mother said, adding that she and her husband are undergoing genetic testing to confirm a tentative new diagnosis—epidermolysis bullosa.

Epidermolysis bullosa is a rare genetic connective tissue disorder that leaves skin extremely fragile, even minor friction or trauma can easily cause blisters and tears.

People who suffer from the most severe form of the condition—called autosomal recessive dystrophic epidermolysis bullosa—also have a very high risk of developing a skin cancer called squamous cell carcinoma, the U.S. National Library of Medicine notes, “which tends to be unusually aggressive and is often life-threatening.”

According to the U.S. National Library of Medicine, about 6.5 American newborns out of 1 million births are afflicted with the overall condition, while “the severe autosomal recessive forms of this disorder affect fewer than 1 per million newborns.”

Additional effects of the disease “can include fusion of the fingers and toes, loss of fingernails and toenails, joint deformities (contractures) that restrict movement, and eye inflammation leading to vision loss,” the U.S. National Library of Medicine writes.

‘Very Long Road Ahead of Him’

“It could be two to three weeks before they have an answer. They don’t want to treat my son for the wrong thing,” Maldonado told the San Antonio Express-News.

As doctors wait to confirm their diagnostic suspicions, they are planning an operation to separate Ja’bari’s throat and chin from his chest.

“He’s been in the hospital his whole life,” the mother told San Antonio Express-News. “I’ve been able to hold him twice, but you have to be dressed in a gown and gloved-up. It’s not skin-to-skin. It’s not the same.”

“[Ja’bari has] a very long road ahead of him,” she wrote on the GoFundMe campaign page. “Nothing will happen overnight or over a few months, it’s going to be years and years ahead.”

“From day one, they said he had no chance of surviving and I would hate to give up or [for] everybody else to give up on him when he’s made it this far in life,” she told News 4 San Antonio. “I just want my baby to be home and be normal and [to] be able to hold [him.]”