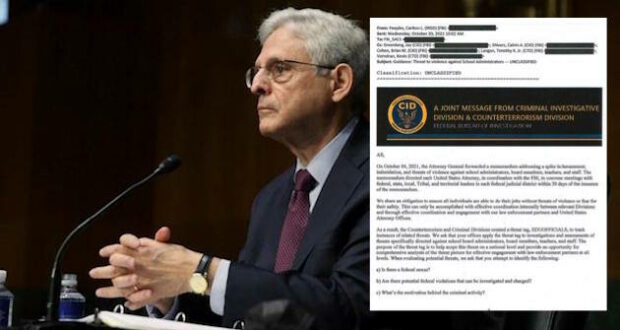 Attorney General Merrick Garland's testimony has been contradicted by a whistleblower in the FBI.

The Biden administration Justice Department came under fire last year for referring to concerned parents as domestic terrorists. Now it has announced that it is forming a specialized unit dedicated to domestic terrorism.

Matthew Olsen, assistant attorney general for national security, announced the move during congressional testimony this week. “The threat posed by domestic terrorism is on the rise,” he said. “The number of FBI investigations over the past two years since March 2020 has more than doubled.”

Olsen cited as examples the 2019 mass shooting at a Walmart in El Paso; the 2018 mass shooting at the Tree of Life Synagogue outside of Pittsburgh; the 2017 shooting at the Congressional baseball game practice; and the 2015 shooting at a church in Charleston, S.C. Olsen also noted the anniversary of the Capitol riot and pointed out that the DOJ has arrested 300 on felony charges in connection with the Jan. 6 protests.

“The attacks in recent years underscore the threat that domestic terrorism continues to pose to our citizens, to law enforcement officers, to public officials and to our democratic institutions,” he said. “Based on the assessment of the intelligence community, we face an elevated threat from domestic violent extremists.”

The creation of the taskforce comes as new questions arise about the circumstances of the infamous letter from the National School Boards Association comparing parent disruptions at school board meetings with domestic terrorism. Education Secretary Miguel Cardona may have “solicited” the letter from the association, which prompted Attorney General Merrick Garland to publish a memo instructing the DOJ, including Olsen’s National Security Division, to develop plans to “discourage” threats and potentially prosecute parents.

Last year an FBI whistleblower revealed the FBI was using counterterrorism against parents at school board meetings.

Pressed by Judiciary Committee ranking member Chuck Grassley on the subject, Olsen assured him that the National Security Division was playing only an advisory role in enforcing the memo and that the memo was a low priority for the division.