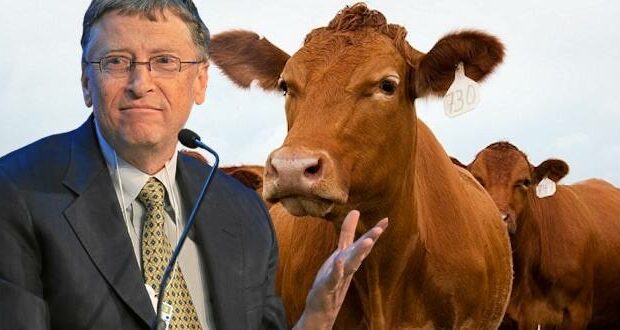 Bill Gates wants to save the world by banning consumption of beef.

The co-chair of the Bill and Melinda Gates Foundation and chair of the investment fund Breakthrough Energy Ventures made the comment during a discussion about his new book “How To Avoid a Climate Disaster,” Technology Review reported.

The book discusses how technology can be used to slash emissions in “hard to solve” sectors like agriculture.

“In terms of livestock, it’s very difficult. There are all the things where they feed them different food, like there’s this one compound that gives you a 20 percent reduction [in methane emissions],” Gates said.

“But sadly, those bacteria [in their digestive system that produce methane] are a necessary part of breaking down the grass.”

He added, “And so I don’t know if there’ll be some natural approach there. I’m afraid the synthetic [protein alternatives like plant-based burgers] will be required for at least the beef thing.”

The Food and Agricultural Organization predicted a global shortage of protein-rich foods worldwide in the wake of the coronavirus pandemic, which could exacerbate health problems.

An estimated one billion people worldwide suffer from protein deficiency, according to the Cornell Alliance for Science.

Gates contends that in rich countries, synthetic meat could be the solution though there’s not much science to back it up.

“For Africa and other poor countries, we’ll have to use animal genetics to dramatically raise the amount of beef per emissions for them,” Gates said.

Bill Gates saying western countries should switch to "100% synthetic beef" while himself being a vociferous carnivore and admitting his favorite food is hamburgers.

You'll be eating the 3D printed plastic meat, not him and his Davos friends.

Gates said, “you can get used to the taste difference” and companies say they are going to make the synthetic meat taste even better.

“Eventually, that green premium is modest enough that you can sort of change the [behavior of] people or use regulation to totally shift the demand,” he said.

“So for meat in the middle-income-and-above countries, I do think it’s possible.”

Impossible and Beyond also have a “quality road map and a cost road map” that will make them competitive, according to Gates.

Critics were quick to pounce on Gates’ statements. Some believe that synthetics are the cause for a worldwide surge in cancer rates.

Others question why Gates should dictate what countries should do to address climate change when a new report in the Nation named Gates as one of the world’s top carbon emitters. It notes he lives in a 66,000-square-foot mansion outside of Seattle, and his private jet consumes 486 gallons of fuel each hour it flies.

Even Gates recognized that this idea is hard to swallow. “Saying to people, ‘You can’t have cows anymore’ — talk about a politically unpopular approach to things,” he also told Technology Review.

Indeed, Gates himself admits in his book that he is “an imperfect messenger on climate change.”

In a survey conducted by Michigan State University, just one-third of Americans would be likely to purchase cultured meat, with the other two-thirds veering toward caution. Forty-eight percent said they’d be unlikely to buy the fake meat.

From The Western Journal and other sources.

Previous: Shannon Bream and her book on incredible Women of the Bible
Next: Biblical Israel: Garden of Gethsemane