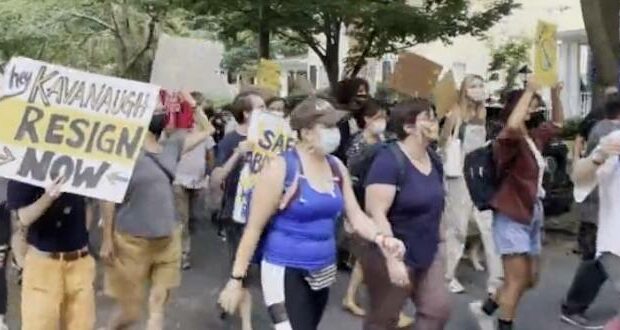 “This protest looks like another blatant attempt to intimidate the judiciary and anyone who disagrees with the radical agenda pushed by partisan advocates,” Republican Sen Chuck Grassley of Iowa said.

The protests against Kavanaugh were over the Supreme Court’s ruling which allows the pro-life Texas Heartbeat Bill to stand.

Grassley said that the leader of the group, ShutDownDC, recently pleaded no contest to criminal trespass charges and was told to stay away from the wife of Missouri Sen. John Hawley. The group terrorized Erin Hawley while she was home alone with her children in January 2021.

“We all know you have to have a tough mental hide to be in this business, but it’s absolutely unacceptable from my point of view to involve any major public figure’s family or their home, or to involve yourself in criminal trespass in the name of political freedom of speech,” Democratic Sen. Dick Durbin of said. “There are proper venues to express yourself, and I don’t believe a person’s home, or their family should be fair game.”

ShutDownDC responded to the criticism with a statement posted on its website which described the event outside Kavanaugh’s home as “an energetic home demonstration.” The group said it took the protest to Kavanaugh’s doorstep because the justices have been working remotely.

“Justices know that criticism comes with the territory, but threatening statements of this sort from the highest levels of government are not only inappropriate, they are dangerous,” Roberts said. “All members of the court will continue to do their job, without fear or favor, from whatever quarter.”

The Texas law prohibits abortion after a fetal heartbeat is detected, usually around six weeks of pregnancy. But instead of having state officials enforce the ban, private citizens are able to sue abortion providers in civil court who violate the law.

The Supreme Court sided with Texas over pro-abortion groups when it left the Texas law in place while the issue is litigated.