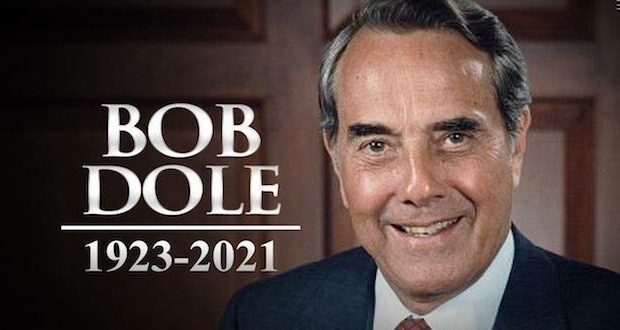 Condolences continue to pour in over the death of former U.S. Senator Robert Dole. The Republican died over the weekend at the age of 98. Dole is survived by his wife, former Sen. Elizabeth Dole (R-N.C.), and his daughter, Robin Dole.

“Senator Bob Dole was a truly great man who lived an extraordinary life of service to America and he will be deeply missed by all of us who had the privilege to know him,” former Vice President Mike Pence wrote on Twitter.

Former President Donald Trump said in a statement: “Bob Dole was an American war hero and true patriot for our Nation. He served the Great State of Kansas with honor and the Republican Party was made stronger by his service. Our Nation mourns his passing, and our prayers are with Elizabeth and his wonderful family.”

Dole endorsed Trump and remained close to him often defending the former president against baseless charges made in the media and by Democrats investigating the now-debunked Russian collusion hoax.

The news of Dole’s death came at a time when headlines were filled with coverage of the Omicron variant, Chris Cuomo’s firing from CNN and a continuing budget and border crisis.

In a statement made through the Elizabeth Dole Foundation, his family said he “had served the United States of America faithfully for 79 years.”

It is with heavy hearts we announce that Senator Robert Joseph Dole died early this morning in his sleep. At his death, at age 98, he had served the United States of America faithfully for 79 years. More information coming soon. #RememberingBobDole pic.twitter.com/57NtGfqtmL

The veteran Republican had been ill for some time and in early 2021 it was announced that Dole was being treated for terminal stage 4 lung cancer.

Dole remained optimistic about his diagnosis and continued to display his famous sense of humor before his condition deteriorated and he left the public eye for good.

“While I certainly have some hurdles ahead, I also know that I join millions of Americans who face significant health challenges of their own,” Dole said in a statement in February.

For 30 years, Dole was a senator for Kansas. In 1976, he was President Gerald Ford’s vice presidential nominee. The pair were defeated by then-Democratic Party presidential candidate Jimmy Carter and his running mate, Walter Mondale.

Dole, who was injured while fighting in World War II, was the Senate majority leader from 1985 to 1987 and again from 1995 to 1996. In 1996, Dole clinched the Republican nomination for the presidency, but he was ultimately defeated by incumbent President Bill Clinton, a Democrat.

Writing in his memoir, “One Soldier’s Story,” Dole said that his experiences in World War II defined his life.

“Adversity can be a harsh teacher,” he wrote in the book. “But its lessons often define our lives. As much as we may wish that we could go back and relive them, do things differently, make better, wiser decisions, we can’t change history. War is like that. You can rewrite it, attempt to infuse it with your own personal opinions, twist or spin it to make it more palatable, but eventually the truth will come out.”

Flags have been ordered flown at half-staff across the nation. A number of former officials and lawmakers offered their tributes to the Republican senator on Dec. 5.

Rep. Vicky Hartzler issued a statement: “It is with great sadness I learn about the passing of Senator Bob Dole. He was a World War II hero, a patriot, and a public servant who served his nation for over 79 years. Whether it be serving his country in the Army, as U.S. Senator from my neighboring state of Kansas, leading the U.S. Senate, or running for President, Sen. Dole was always fighting for America. I was blessed to visit with him several times on plane rides to DC and when he came out to greet veterans on Missouri’s Honor Flights at the World War II Memorial in Washington.”

Sen. Roy Blunt issued a statement. “For decades, Missouri Republicans considered Bob Dole as our third United States Senator. His quick wit and his keen understanding of America’s role in the world were always part of any conversation you had with him. A great life, well lived.”

President Joe Biden described Dole as a man with “an unerring sense of integrity and honor” in a statement Sunday afternoon.

The two spent years on opposite sides of the Senate, but Biden noted that despite their policy disagreements, Dole never hesitated to work with Democrats on important bipartisan efforts, something Biden has been criticized for failing to do as he pushes through his massive spending bills.

Sen. Roger Marshal (R-Kansas) said Dole “was an American hero, a statesman of the highest order, [and] one of the greatest legislators of all time. Most importantly, he was forever a Kansan who always put service above self.

“Laina [and I] join Kansans in holding Elizabeth, Robin [and] the entire Dole family in our prayers,” Marshal wrote.

Sen. Chuck Grassley (R-Iowa) wrote, “Barbara & I are sad to hear of passing of war hero/Senate Majority Ldr /presidential nominee Bob Dole He was a dedicated public servant + kind + funny + hard worker + a true patriot We send our love to Elizabeth & his family.”

Former President Bill Clinton paid tribute in a tweet. The two faced off when Dole was chosen to be the 1996 Republican presidential nominee, challenging Clinton’s re-election bid.

“Bob Dole dedicated his entire life to serving the American people, from his heroism in World War II to the 35 years he spent in Congress,” Clinton wrote. “After all he gave in the war, he didn’t have to give more. But he did. His example should inspire people today and for generations to come.”

Dole registered for the Army in 1942 and was a second lieutenant when he was sent to Italy in 1944. The following year, as he was trying to rescue an Army radioman, he was caught in a German machine gun attack, which cost him a kidney, shattered his right shoulder and damaged his neck and spine. He was temporarily paralyzed from the neck down.

His arms never fully recovered, his legs remained partly numb for the rest of his life, and he never got back the use of his right arm.

Previous: Liver transplant waiting lists fueled by alcohol, obesity
Next: Coach sues after he was fired for replacing BLM poster with one about Jesus caring for all lives