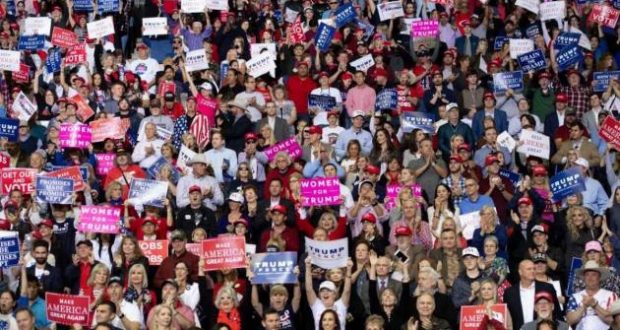 Early voting turnout data from six key battleground states suggest a surge for the Republican party as President Donald Trump ramps up campaign rally appearances across the country ahead of the Nov. 6 midterms.

These states are pivotal in the Senate, House, and gubernatorial races, which are now just 13 days away, according to a Fox News analysis.

The data suggest the GOP’s early boost could weaken chances of the purported Democratic “blue wave” in November, a scenario where Democrats would win enough races to gain control of at least one branch of Congress. Recently, top political operatives in both parties questioned not only the size of the Democratic wave, but whether there will be any wave at all.

According to the analysis, Republicans are leading over Democrats by 12 points in Indiana, 11 points in Arizona, 6 points in Florida, 9 points in Georgia, 17 points in Montana, and 10 points in Texas.

Meanwhile, Nevada was the only state where Republicans did not outpace Democrats, who currently lead by 7 points.

The analysis also revealed other trends, such as how women outpaced male voters in a majority of the key states.

More than 5 million votes have been cast early or absentee in the 2018 midterm elections nationwide, as of Oct. 22.

“If it had been a different year, with a different map, we might have had a terrific sweep,” Democratic pollster Paul Maslin told AP of the Democrats’ outlook in the Senate. However, he said, as it currently stands, it “would be a long shot.”

Trump is pushing to maintain and expand the GOP’s current slim majority in both the House and Senate. In recent months he has gone on a number of campaign blitzes, visiting key states outlined in the analysis, including Indiana, Montana, Tennessee, and Arizona.

Most recently, Trump rallied in Houston, Texas, to give a boost to Sen. Ted Cruz, who is leading in multiple polls. The Toyota Center filled up its 18,000-seat capacity, as a further 10,000 to 15,000 supporters watched from outside on digital screens. Earlier, Trump’s 2020 reelection campaign said more than 100,000 Texans registered to attend the event.

At the rally, Trump responded to talk of a “blue wave,” saying it has died down quite a bit.

“About a month ago, they were talking about this ‘blue wave.’” Trump told the crowd. “We’re not hearing that anymore. The blue wave is being dissipated a little.”

Cruz will face opponent Rep. Beto O’Rourke (D-Texas) in the Senate race. The GOP has the current 51–49 advantage in the chamber.

So far, most of the GOP candidates endorsed by Trump have gone on to win, in part because of his popularity with his base. A weekly average Gallup poll between Oct. 15 to 21 found 91 percent of Republicans approved of the job he is doing.

In addition, a national poll by NBC News-Wall Street Journal found the “blue wave” far from taking over.

The poll, released on Oct. 21, showed that 48 percent of registered voters would prefer having the Democrats in control of Congress, in comparison to 41 percent who want the GOP in control. The poll’s 7-point gap is now narrower than the 12-point gap the Democrats had in September.

The poll also tracked Trump’s approval rating at 47 percent, one of his highest points ever. The number is a three-point increase from September. In contrast, 49 percent respondents disapproved.

“Midterms are about mobilization, and we are headed into the stretch run with unprecedented enthusiasm among both parties,” Democratic pollster Fred Yang told The Wall Street Journal.

“We always knew that this election was going to be close—I don’t use the term ‘blue wave,’ I always talk about the need for the blocking and tackling,” Perez told CNN.

An Oct. 15 CNBC poll yielded similar results. After surveying 800 Americans across the country, the pollsters found Democrats leading on the question of who voters will choose in November 42 percent versus 36 percent Republican.

“A six-point differential is not something that’s going to cause a big electoral wave,” said Micah Roberts, the Republican pollster on the CNBC poll. “Economic confidence that people have among a lot of groups is providing a buffer.”

Economic confidence remained a focal point in the poll, with 48 percent optimistic about the current economy now and going forward. The number is the highest level in the poll’s 11-year history and more than double the 20 percent registered in the December 2016 survey.