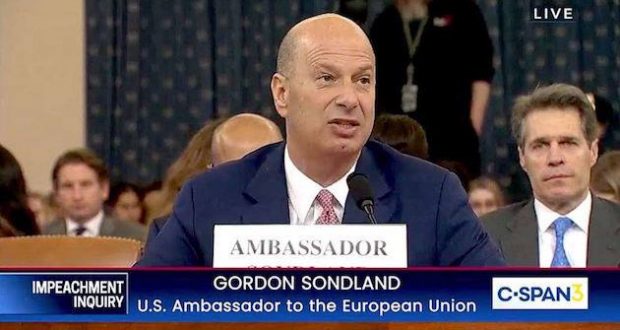 Despite media hype of “bombshell” testimony, statements by US Ambassador to the European Union, Gordan Sondland, were a knife in the heart of Democrat claims.

Sondland’s testimony in Wednesday’s impeachment at first looked like it was what Committee Chair Adam Schiff was looking for.  Sondland said “everyone” knew that aid to Russia was tied to that country investigating meddling in the 2016 election. But then something interesting and unexpected happened. Schiff asked a question and got an answer he was not expecting. Sondland recounted how President Donald Trump said he wanted “nothing” and “no quid pro quo” from the Ukrainians. Only that they do the “right thing.”

Republicans maintain his account is proof President Trump was not involved in any quid pro quo, while Democrats argue otherwise.

“I think today’s testimony is among the most significant evidence to date,”  Schiff (D-CA) told reporters.

Schiff claimed this as a very important moment for the impeachment inquiry.

“It was the conditioning of official acts for something of great value to the president, these political investigations,” Schiff said. “It goes right to the heart of the issue of bribery as well as other potential high crimes and misdemeanors. But we also have heard for the first time that knowledge of this scheme was pervasive.

While Republicans flag this point made repeatedly by Sondland.

When asked if the President ever told him about any preconditions for the aid to be released, Sondland replied, “No.”

Sondland claimed he thought a quid pro quo existed, but not in regards to holding up aid.

“As I testified previously, Mr. Giuliani’s requests were a quid pro quo for arranging a White House visit for President Zelenskiy.  Mr. Giuliani demanded that Ukraine make a public statement announcing investigations of the 2016 election, DNC server and Burisma.

Sondland then eventually presumed the hold on security assistance played a part as well.

“That was my presumption yes,” he told the committee, while still making it clear he never got a presidential directive.

“My testimony is I never heard from President Trump that aid was conditioned on announcement on elections,” Sondland said.

And he also recounted a phone call with President Trump – he asked point-blank what Trump wanted from Ukraine.

“He said nothing. ‘I want no quid pro quo. I just want Zelensky to do what he ran on,'” the ambassador testified.

Much like Tuesday’s witnesses Sondland also testified, at the time, he did not equate investigating Burisma with the Bidens.

“It was always Burisma to me and I didn’t know about the connection to Burisma and Biden,” he told the committee.

Republicans also questioned if it was really that unusual to hold up foreign aid.

“Before a president can send foreign aid, there has to be certification that there was no corruption,” Nunes said.

“I’m aware of that now,” the ambassador answered.

While leaving the White House Wednesday afternoon, President Trump read directly from a transcript of the day’s testimony.

“He asks me screaming, ‘What do you want from Ukraine?'” Trump read.

Sondland: “It was a very short abrupt conversation. He was not in a good mood.”

“I’m always in a good mood. I don’t know what that is,” the President said as he continued reading.

Sondland: “I keep hearing all these different ideas, theories and this and that – what do you want?”

As the President insisted again he did nothing wrong, he pushed back on Sondland’s testimony.

“I don’t know him very well. I have not spoken to him much. This is not a man I know well. Seems like a nice guy though,” Trump said.

But Wednesday that nice guy threatened to crack the impeachment inquiry wide open. Trump disagreed, calling for people to “read the transcript” and insisting the phone call was “perfect.”

Then he says the final word from the President of the United States. I want nothing. Thank you. folks. Have a good time,” the President told the assembled members of the media.

The White House also released a statement saying “Democrats are chasing ghosts” and that Sondland’s testimony only reiterated that Trump “wanted nothing” from Ukraine.

Previous: The Pilgrims and the truth about good immigration
Next: New Chick-fil-A donation policy draws skepticism from left, anger from right